The death of an in-shape friend and someone who is my age, really hit me when I read Bill Gordon had died on Facebook Sunday afternoon. He was one of my Ohio Northern University roommates and according to closer friends, he was on a ride Saturday morning and collapsed. How can that be??? He was an avid cyclist, rode all the time and was in great shape. Obviously better than me considering his high cardio activity (did he push his body too hard?)

A few positive memories below:

Bill Gordon and I were roommates when we first headed to ONU for our engineering summer orientation prior to the start of our freshman year. We hit it off right away and would have continued as roommates, but I had already matched up and agreed to room with Jerry Moody (we remain roommates for all 4 years of undergrad, so no problem there).  Jerry and I added Don Blinn to fill out a 3-man dorm room and we all remained friends with Bill — even those he was quite distracted by a cute girl named Julie … his college sweetheart and the love of his life … for the rest of his life!  Still, he needed a place to live, eat and sleep and we needed a #4 to cover the rent … so was our first choice was Bill to fill the spot our senior year. (few know this, but I’m most thankful for Julie, because Brenda, who lived upstairs, may have been interested in Bill if not for Julie? Whew, close call.) 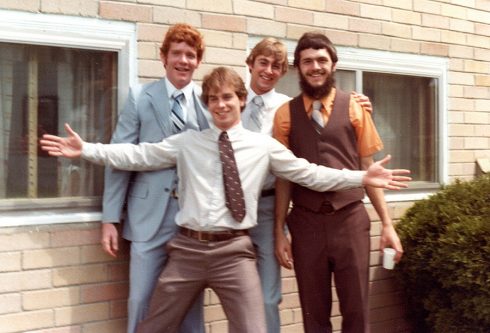 The four “roomies” spread out in different directions after college and we, for the most part, lost track of one another. I was working for a purchasing division of Knight-Ridder (a newspaper corp) and Bill for Goss (printing press equipment manufacturer) and by chance the big Chicago Print/GraphExpo tradeshow brought us together for a day or two. We were both surprised to see each other. Similarly, we moved from Cleveland to Cincinnati about the time the Gordons moved to Columbus … after reconnecting a bit in recent years, we found out we were only a few miles apart when they were here and likely our kids would have been in the same Lakota schools.

Interestingly Bill and Julie’s son moved to Cincinnati while my daughter was moving to Columbus for her residency — Julie instinctively said Katelyn should come over for a home-cooked meal.  Good memories.

I realize Bill and I were not overly close, but I’m emotionally sad for Julie and their children. For Bill himself, not so much. He was involved with Outdoor Pursuits in Central Ohio and doing what he loved … riding. From day one in 1977 at ONU, Bill rode … and took care of his expensive bike (generally I teased him about that “skinny silk tired fragile toy”). In other words, riding for him was his passion … he did it all the time and obviously his whole life. Few of us prioritize life around our passions and get to pursue it like Bill Gordon did. He lived a great life, had a great family … and was with the one he loved. Sadly … his life was too short. Carpe Diem readers.

Gordon William J. Gordon. The cycling community lost a leader and friend Saturday morning when William J. Gordon passed away suddenly while biking with friends. A Dublin resident, Bill was born February 22, 1959 in Elyria, Ohio. He graduated from Huron High School in 1977, and from Ohio Northern University in 1981 with a degree in Mechanical Engineering. At the time of his death he was Events Director for Columbus Outdoor Pursuits. Earlier in his career, Bill was an executive in the newspaper printing industry. He was preceded in death by his birth mother Nancy Yarrington Gordon and nephew William Michael Gordon. He is survived by his wife, Julie Zickar Gordon, who he met while attending Ohio Northern; his son, William Ryan Gordon; his daughter, Abigail Katherine Gordon; his father and mother, Richard J. and Linda K. Gordon, Dublin, Ohio; his two brothers, Scott Gordon (Samantha) Cincinnati, Ohio, Bryan Gordon (Megan) Dublin, Ohio; and his two sisters, Linda Hoptry (James) Medina, Ohio, Jennifer Duwel (Kyle) Dayton, Ohio; and his 11 nieces and nephews. Calling hours will be held at RUTHERFORD FUNERAL HOME AT POWELL, 450 West Olentangy Street, Powell, Ohio on Friday, June 17 from 4-8 p.m. with a funeral mass on June 18, at 11 a.m. at RUTHERFORD FUNERAL HOME AT POWELL, and interment at Dublin Cemetery immediately following. In lieu of flowers, donations can be made in Bill’s memory to GOBA, Bike Lady, Pedal-With-Pete, or Yay Bikes. To send an online condolence, please visit www.rutherfordfuneralhomes.com.