Well musicians can have an unusual beginning and career turns. Before a musical career, John Hall (photo right) was an academically gifted 3-time National Science Foundation summer scholar and University of Notre Dame and Loyola College physics student at the age of 16 and after music, he ran for political office and end up a Representative for New York’s 19th congressional district in the US House of Representatives from 2007 – 2011 (link). Somewhere in between he wrote a few songs, played in bands and founded the band Orleans.

So much for moving my musical selections out of the 1970s as mentioned a week or so ago, but was reminded of an Orleans favorite from my teenage years this past week when talking to my wife about our granddaughter Annalyn and commenting that my wife Brenda was “still the one.”

That great song from 1976 aside, what I really thought was interesting is that U.S. House of Representative John Hall 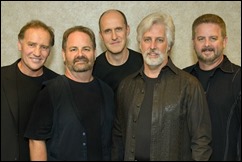 was co-founder of the band Orleans in Woodstock, NY back in 1972 and had written songs for “friend” Janis Joplin, recorded with Taj Mahall, Bonnie Raitt and Seals and Crofts, as well as performed in a couple of bands prior prior to starting Orleans with Wells Kelly. The two added Larry Hoppen (committed suicide in 2012) and his brother Lance to make up the band with Peter O’Brien rounding out the five while recording in the late 1970s. Hall left to solo and pursue environmental causes for with other musicians for a few years.

The group reunited in 1986 and has performed and recorded off and on through the years with a noted break up in 1997. Obviously music was still in their blood since they were back again in the 2000s both performing and recording new music — the album “Dancin’ in the Moonlight”  in 2004 and “We’re Still Havin’ Fun” in 2007.

From their earliest days as a favorite at colleges and clubs in the Northeast US … to studio and live collaborations with industry greats Bonnie Raitt, Jackson Browne, Little Feat and others … to Top 10 success with bona-fide classics such as “Still the One”, “Dance With Me” and “Love Takes Time” … now celebrating their 40th year of creating musical history together, Orleans has continually demonstrated “depth”.

“Depth”: A word used to describe sports teams who are multi-dimensional, movies that must be seen many times, art that continues to reveal hidden meaning. In the throwaway world of Rock & Roll bands, how often do you see real depth? For the past 4 decades, Orleans has defied industry pundits and career counselors by doing many different things well.

Orleans has been performing live nearly every year since 1972, always with at least half the original members. They do it the old-fashioned way – they sing and play their own stuff. Their oldest fans are bewildered and amazed at the fact that they still sound as good as (or even better than) ever … especially their vocals! Younger fans are simply impressed. Everyone agrees – these guys “still have it”.

Formed in Woodstock, NY in 1972 by John Hall, brothers Lance and Larry Hoppen and Wells Kelly, Orleans went about perfecting its recipe of eclectic material, including R&B seasoned with Cajun and second-line roots. Alan Toussaint, Neville Brothers and Meters tunes were among the mix (hence the choice of name). But the quartet’s music evolved and refined in a more mainstream direction as they developed their unique pop/rock sound, which led Rolling Stone magazine to christen them “the best unrecorded band in the country.”

A round of showcase performances in NYC gave rise to a recording contract with ABC Dunhill Records and the release of the eponymously titled first album in 1973. Later signing with Asylum Records, they produced chart-topping hits including “Dance With Me”, “Let There Be Music”, “Love Takes Time”, “Reach” and, of course, their American standard, “Still the One”. Adding to each other’s strengths, John was the most prolific songwriter while Larry supplied the lead voice for the radio hits. Just three of Orleans’ classics have a certified combined airplay total of over seven million … and counting!

After Orleans established national radio popularity, Hall left in 1977 to pursue a solo career, as “Still the One” played ceaselessly as the ABC TV network theme song. With Bonnie Raitt, Jackson Browne and Graham Nash, he co-founded Musicians United for Safe Energy (MUSE) in 1979 and co-produced the Madison Square Garden concerts and Warner Brothers triple album “No Nukes”. The same activism resulted in John’s election to the Ulster County (NY) Legislature and Saugerties Board of Education.

Orleans (the Hoppens and Kelly) continued to tour and record, scoring a Top 10 hit with “Love Takes Time” in 1979. Following Wells’ untimely death in 1984, a memorial gig reunited the Hoppens with Hall. Larry confides, “It was with that turning point and the perspective it brought that we started to refer to our Orleans project as a perpetual ‘work in progress’“.

By 1986, a reunited Orleans had cut the “Grownup Children” album under the direction of famed Nashville Producer/MCA label chief, Tony Brown. 1990 saw the group’s double live CD anthology release, first in Japan and later in the states. Two tours of Japan, an appearance at Woodstock ’94, and the Can’t Stop Rockin’ Tour with Fleetwood Mac, REO Speedwagon and Pat Benetar in ’95 were highlights of the early 90s, as were the releases of both the “Analog Men” and “Ride” albums.

Orleans’ “Dancin’ in the Moonlight” CD was released in 2005 to fans eager for the band’s first new studio recording in ten years. It includes a great version of that song, which Larry first recorded with its writer, Sherman Kelly (Wells’ brother) back in 1969, before their friends King Harvest hit with their own version in 1973. The rest of the album is what Orleans has always done – great original songs with terrific arrangements, vocally and instrumentally, superb lead vocals, memorable melodies and lyrics … and a surprise guest or two!

When John announced to Larry and Lance in late 2005 that he intended to run for Congress, no one was surprised. All 3 made contingency plans: Orleans would play shows with Hall as schedules allowed while simultaneously reintegrating Dennis “Fly” Amero, who had played guitar with the band when John went solo earlier on. The band filmed its first-ever live concert DVD. Released in November of 2006, it features an expanded roster including both John and Fly, performing much of Orleans’ musical legacy from its then three and a half decades. Some of that audio comprises the 2007 SONY CD release “We’re Still Havin’ Fun” and Orleans, including Hall, recurrently appears on PBS’ ‘My Music: The 70s Experience’, (filmed in May 2006).

Hall then went on to serve two terms (2007-2011) as a U.S. Representative (D-NY, 19th) as Amero carved out his permanent place in the band, joining youngest Hoppen brother, Lane, on keyboards and drummer Charlie Morgan (best known for his many years with Elton John). Hall and the Hoppens agreed that, on the occasions when it is possible, all three Orleans co-founders would still gladly reunite. As they headed into their 40th anniversary year, plans were being made to do just that in a BIG way … but Fate had other plans. On July 24th, 2012, Orleans suffered its biggest tragedy to date. On that day, at his home in Sanford, FL, Larry Hoppen succumbed to a “perfect storm” of long-standing, life-draining stresses. Suddenly, he was gone.

We mourned the loss. We survived the shock. We honored his memory by keeping on keeping on. With the return to the fold of John Hall, Orleans committed itself to (at least) finishing the 2012 calendar of scheduled performances. That mission ended in Nashville, TN on November 11th with an “Orleans & Friends” fundraising concert to benefit Larry’s children. And that might have been the end of it right then and there, if not for the infusion of new energy by new management.

With the help of Len Fico, the band signed on to 2013’s “Sail Rock Tour”, not only playing a set of their own hits, but providing back up for headliner Christopher Cross and contemporaries Firefall, Gary Wright, John Ford Coley, Robbie Dupree, Player and Al Stewart. That year also saw the release of “The Last Band Standing” DVD and the double-disc compilation CD, “No More Than you Can Handle”, featuring several previously unreleased recordings. Among them is the title cut, which was the last in which Larry was to participate.

2014 saw another round of tour dates and, as we write this, the current configuration of Orleans … Lance, John, Lane, Charlie and Fly … are in the process of recording what will hopefully be the first of more tracks from this now legendary institution … as the journey continues into 2015 and beyond.

Among music fans in America there is a broad consensus that, for some time now, music on radio, TV and elsewhere has generally lacked intelligent lyrics and memorable melodies. Many also express concern that the music their kids regularly hear is not suitable for young ears. This group’s music has always been family-friendly, intelligent and melodic, well before those things were issues. “Still The One” has been and continues to be used for countless media commercials and movie soundtracks. It’s so mainstream and has such mass appeal that, during the 2004 Presidential campaign, it was used by both the Republican and Democratic parties!

You might be surprised to know some of the broad and deep connections Orleans has woven into the fabric of American music, going back to the early 1970s. Songs composed by members (mostly John) have been covered by James Brown, James Taylor, Chet Atkins, Bonnie Raitt, The Fifth Dimension, Bela Fleck, Linda Ronstadt, Oak Ridge Boys, Barbara Mandrell, Bobby McFerrin, Ricky Skaggs, Janis Joplin, Steve Wariner and numerous other notable artists.

The members of the group have sung and/or played on records by Michael Franks, Graham Parker, Little Feat, Jackson Browne, Ricky Skaggs, Bonnie Raitt, Planet 9, Robbie Dupree, Blues Traveler and many other artists. They have, in turn, had Michael Brecker, Blue Mitchell, Chet Atkins, Linda Ronstadt, Warren Bernhardt, Bela Fleck, Tony Levin and many others help out on their albums.

Orleans may be the only American band to have sung backup vocals on a #1 Country record (Steve Wariner’s “You Can Dream of Me”, which John co-wrote) and a #1 Jazz record (Michael Franks’ “The Dream” from his “Dragonfly Summer” album.).

Few popular music groups have been performing and recording with their original members for decades (and even fewer can claim that it has been a vehicle for a United States Congressman), yet Orleans still currently performs around the globe. Original members Lance Hoppen and John Hall are now joined by youngest Hoppen brother, Lane, on keyboards, drummer Charlie Morgan (best known for his many years with Elton John), and Dennis “Fly” Amero on guitar. They’re still consistently in demand for performances at fundraisers, private functions and positive cause-based events.