Ah yes … Brenda is working night shift hours this weekend so it gave me a chance to monkey around with her new Samsung Galaxy S II Epic … purloined it while she was sleeping today. 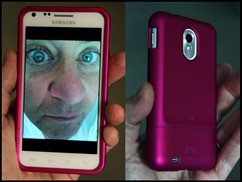 One of her ploys to keep me from playing with her new smartphone was to add the new protective case in a feminine color … and while this may keep me from using it in public, it has little affect on me at home.

So far I found Ice Cream Sandwich (ICS) — Android 4.0.4 — easy to use, even for someone resistant to learning something new. Still there are things I like and dislike coming from WebOS (Palm Pre) as well as using iOS on the iPad. In time though I suspect that one adjusts to the change as Android has come a long way and is improving everyday. I’ll probably resist rooting Brenda’s phone since the extent of her use is pretty basic. Her biggest complaint so far has been the lack of a physical switch to stealthily turn off the audible ringer.

After updating and installing a few apps from Google Play, I tested the weak 4G (WiMax – not 4G LTE) Sprint connection at the house. My daughter’s EVO 4G had trouble, but it looks like using it will be do-able on the Samsung (perhaps there has been some tower tuning?). Nevertheless, a house 4G connection isn’t all that important with wifi available – unfortunately she doesn’t have wifi or 4G at work. 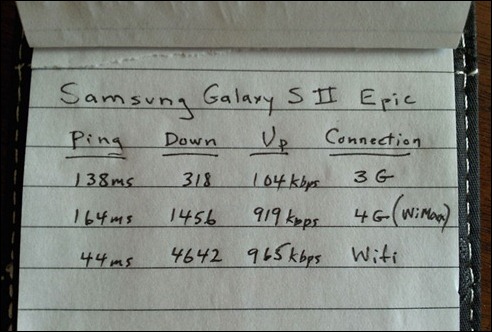 Included the speed test as a macro photo from the excellent 8mp camera. Nice!