With a bit of rain this past week, it was appropriate to listen to some "mellow music" on The Bridge channel on the SiriusXM iPhone app. 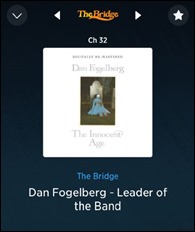 Rain you say? Last Thursday was the wettest August day ever and the second wettest day ever for Cincinnati. A whopping 5.02 inches of rain was recorded at the Cincinnati/Northern Kentucky International Airport – second only to the 5.21 inches that fell on March 9, 1964.

But back to the Music Monday … here’s a morning twofer: One from 1981, Leader of the Band by Dan Fogelberg and Father and Son from 1970 by Cat Stevens.