Human-Induced Climate Change – Take it with a grain of salt 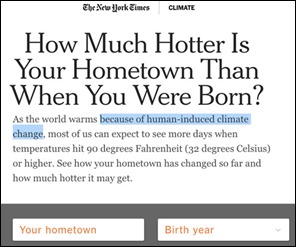 Some interesting results using my birth town and the "number of 90 degree days" in a New York Times "tool" which I interpret as wanting to alarm us into action over the "human induced climate change" projections. If you haven’t already dug your heels in with an opinion (likely influenced by politics either way) … it is not hard to recognize the slant and agenda of "Climate" writers for the NYTimes.

I’m not educated enough in climate science to know how much to panic and how much to take with a political grain of salt. Deep down I wonder if the gradual environmental improvements we have made (and I have witnessed) in the US over the last 50 years is an appropriate path … and if the focus should be on countries where there is the most room for improvement even beyond "carbon emissions."  It also occurs to me that we are not as brilliant as we think; there are often unforeseen events in nature that change opinions over time … in fact 40 years ago we were fearing "global cooling!"

But below is the recent NYTimes Interactive look at my birth city of Toledo Ohio from 1960 to 2017 – should I be worried enough to sabotage our standard of living and economy? (there are fewer days above 90 in recent years than in 1960 – the earliest year in their records) 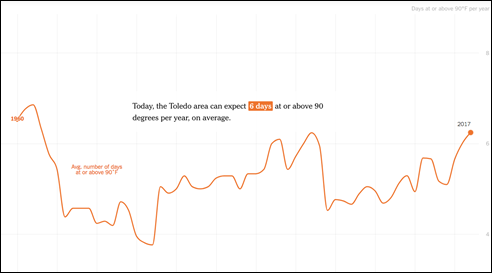 Sometimes the alarm is sounded louder than the actual problem and in my opinion that "sky is falling" approach hurts the cause — I’m sure many cities are now hotter than before.

How significan is the change and how serious should we take these projections (below)? Hopefully we don’t sabotage our economy and degrade our standard of living too much … because unhappy and hungry people historically do desperate things (aka: war). 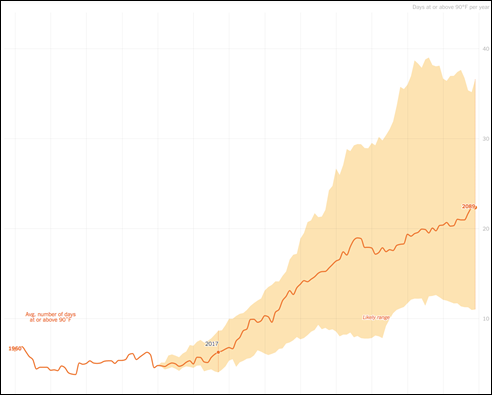 How is it even possible to plot a credible squiggly line thru 2089 and expect governments to derail economies, curtail prosparity and to expect people to make life altering decisions based on such questionable and difficult to prove projections?