Politics, a socialist movement and the Overton window in 2019

About a decade ago, I researched a bit about Joseph Overton’s theory regarding a range of ideas that will be tolerated in discussion and debate. 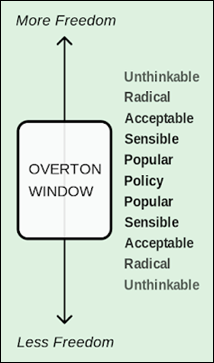 This “range of acceptable ideas” is now termed the “Overton window” and the political concept brought to light in conservative circles when the Democrats, lead by President Obama and Nancy Pelosi, pushed  traditional America further left than many were comfortable with – the uprising inspired a Tea Party Movement. The Overton term also fueled a book by Glenn Beck called The Overton Window (posted about reading it) and likely helped the Republican Party regain control of the congress and White House – at least for a few years (we Americans are deeply divided when it comes to agreeing on a political philosophy).

Once again though, those of us who follow politics, see the “range of acceptable ideas” becoming a topic of discussion and heated debate. The traditionally center-right United States each go-around does seem to be getting shoved further and further left, towards big government and progressive ideas … currently so much so that there seems to be very little embarrassment for some Democrats to call  it “socialism.” That last reference is particularly shocking for those of us who lived and watched socialism take away freedom and prosperity for so many around the world … while capitalism lifted the quality of life for nearly all where it was lightly regulated.

Opinion: Currently I sense that the Democrats are wittingly or unwittingly applying the door-in-face technique in order to move the “window” even further to the political left. The theory being that the are “making large requests” that will get turned down (door slammed in face), but will have softened the electorate to accept more progressive, big government position because it isn’t the extreme “socialist” left. As a conservative, each time we cycle through the swing to the political left and back to the right, the leftist’s movement in America is gaining ground. Policies that were once thought unacceptable to voters, are now accepted party platform. It is especially noticeable with Democrats who have served and run for office for decades, or more recently only an election cycle or two! As the joke goes, current Democrats would view John F. Kennedy as a Reaganite extremist – that how far left the Democratic Party has gone.