Monitoring the COVID19 while working on bookshelf project 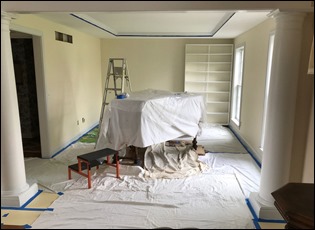 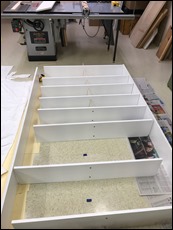 It has been good to be distracted with a painting and bookshelf project while "staying at home" these last few days. Unfortunately the COVID19 Coronavirus doesn’t look to be disappearing or dissipating as quickly as we were all hoping … so it looks as if we’ll be struggling to figure out how to not only occupy ourselves without a daily "out of the house" work routine, but will likely trying to figure out how to pay the bills — both personally and as a country. 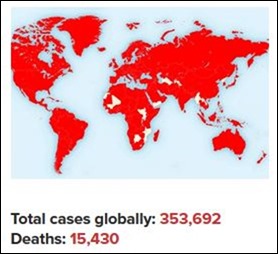 So far (as of this writing on Monday afternoon), Congress cannot come to an agreement that will assist citizens with immediate needs and business so that people have jobs to go back to when this is over. I’m not sure if it is all political wrangling (DEMs vs Republicans) … or if philosophically each side sees the crisis differently? I don’t know what could be more commonsense than assisting those sufferings a paycheck loss and no money to pay for food and bills as well as keeping our countries businesses alive due to mandated shutdowns. Unlike the 2008 financial mess, the current situation was not easily foreseen or something we created. Both individuals and businesses need some kind of assistance to prevent a dire situation that could send the U.S. into something resembling a depression. The moves government makes or doesn’t make this week will likely determine our inevitable direction … and this is an opinion coming from a small government conservative.

Senate Democrats on Monday blocked a cloture vote that would have allowed a $1.8 trillion coronavirus stimulus package to advance for a full vote in the upper chamber.

The vote to end debate on the massive package failed because 60 votes were needed and just one Democrat, Alabama’s Doug Jones, voted aye, with the final tally 49 to 46.

Majority Leader Mitch McConnell needed 60 votes to end debate on the bill and allow it to go to a full vote in the Senate, which means at least 12 Democrats would have to have joined all Republicans in voting in favor.

The sweeping bill, meant to offset the devastating impact of the COVID-19 pandemic, was blocked Sunday night by Democrats who said the package did not do enough to protect American workers and was essentially a slush fund for the GOP’s spending.

McConnell immediately slammed the vote and said it could delay the “Phase 3” portion of the federal aid package for days.

“This has got to stop and today is the day it has to stop,” an exasperated Senate Majority Leader Mitch McConnell (R-Ky.) said on the Senate floor. “The country is out of time.

“As a result of this procedural obstruction, let me explain where we are. By refusal to allow to take this first step, which would have still given them plenty of time to negotiate, we have put the senate in the following position,” the Kentucky Republican said.