TiVo as a Podcast – Netcast player 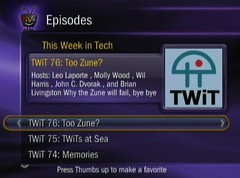 Since I’m relatively new to my Series 2 TiVo branded DVR and have recently networked it rather than use the phone line connections, I though I would play with a few of the less used features today. One of them is to access Internet content in the form of ‘netcasts’ … previously known as ‘podcasts’ until Apple Computer decided to defend its claim to the name? Anyway, here is a YouTube clip that I’ve uploaded that demonstrates how TiVo handles podcasts.

The clip is from the TWIT technology discussions talking about Microsoft’s restrictive reviewers agreement for its “iPod” like device called the “Zune.” (BTW, as for the Zune device itself, even Bill Gates exercises caution when bragging about the device.)