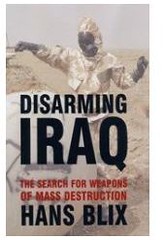 Let me state that I’m not a big fan of Hans Blix, or even most of the PBS ‘political’ oriented news programs, but I do occasionally check on shows not available on a regularly watched right leaning news station. That said, Charlie Rose had a 25 minute interview with the previous head United Nations International Atomic Energy Agency and more recently the Swedish based Weapons of Mass Destruction Commission (WMDC). He is a politician and diplomat as well as the author of the 2004 publication “Disarming Iraq.”

It is clear that Mr. Blix has political views that differ from our countries current path, his goal is none the less the same: a nuclear free Iraq and Iran. To Charlie Rose’s credit, he had a couple challenging questions that seem to remain unanswered by Blix. The current U.S. policy is to negotiate from strengthen in preventing nuclear weapon development in initially Iraq and most recently Iran differs from the softer negotiation mention subscribed by Hans Blix. He sees the build up of forces and ultimatums prior to talking with radical Arab leaders counter productive, and believes that we should negotiate with all things on the table first and stand down military presence in the middle east. Its a dangerous time to be wrong.