The strong storms which passed through southwestern Ohio Monday evening dumped heavy rain and lightning all around our home (see video clip from Palm Pre at bottom). The pool is full to overflowing and the water retention area  overflowed the driveway and patio areas. Thankfully our two sump pumps worked well to keep our basement dry. Other homes and areas were not so fortunate. 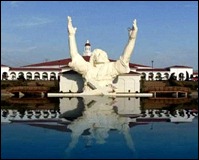 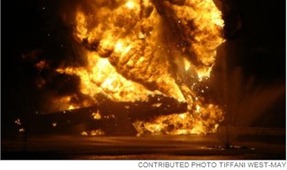 Lightning also took its toll on a prominent landmark in front of the Solid Rock Church in Monroe Ohio which turned the heads of many a passersby along interstate 75 between Dayton and Cincinnati. The statue, King of Kings, “was” a 62-foot high sculpture of Jesus with His hands raised; 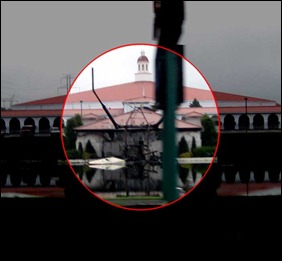 it was commonly referred to as “Touchdown Jesus” or dubbed “Big Butter Jesus” by comedian Heywood Banks. The fire started after the statue was allegedly struck by a “thunderbolt from the heavens,” (social networking sites enjoyed posting updates) and the statue constructed of wood and styrofoam surfaced in fiberglass erupted into a fireball. The thick smoke, according to reports, also did damage to the Lawrence Bishop Music Theater east of the statue. The fire department arrived before midnight and extinguished the flames in about an hours leaving only the skeletal steel beams standing.

At dawn, commuters gawked as they drove by … including my wife and friend Tim who snapped a photo (thanks … but next time without the sign post please).
😉