When I posted the current “Cell Phone Laws by State” map the other day, it was in part due to a project my niece was working on at Ohio Northern University. My brother mentioned she was asked to present their finding to Ohio lawmakers on House Bill 99 (summary) in Columbus last month – kudos to both ONU and my niece Keira. I have no doubt that Ohio will eventually adopt tougher laws regarding cellphone use while driving … BUT being an advocate for smaller-less intrusive government, I see adding this kind of legislation as delegating more of our personal responsibility to the government – a bigger and bigger … and more inefficient and expensive … government at that. 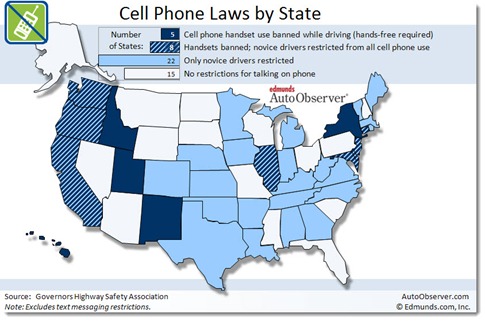 As we’ve continued to improve automobiles and highway safety, deaths at a 60 year low (NATSA PDF), thanks to vehicle improvements and a push to combat drunk driving. Noting this, I am concerned over where government stops in legislating our 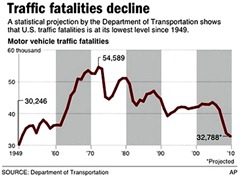 lives, citing safety as their reason. Concern on my part grows as we are being inundated by well intended laws mandating personal behavior. Yes the laws protect the public, but they also infringe on personal liberty. Bureaucrats thinking for their citizens eventually creates generations of government dependent citizens who do not demonstrate personal responsibility or make good decisions for themselves or their families (take a look at those living in poverty today … they are more dependent than ever). From the federal government now mandating Obama national healthcare law, to state laws regulating everything from lane use to seatbelts … and now how we use electronic communication devices (although I noticed that the new proposed Ohio legislation doesn’t apply all of its citizens equally).

The bill declares that the prohibition does not apply to any of the following:

(1)  A person using an electronic wireless communications device in that manner for emergency purposes, including an emergency contact with a law enforcement agency, hospital or health care provider, fire department, or other similar emergency agency or entity;

(2)  A person driving a public safety vehicle who uses an electronic wireless communications device in that manner in the course of the person’s duties;

I’m not suggesting that it isn’t wise to have insurance, wear seatbelts or put the “mobile” phone (cellphone) away when driving, but am concerned over the lack of personal responsibility and the intrusion of a growing government into areas that we should be personally responsible for (not to mention we need to pay cost of paying the bigger government and in this case the enforcement of yet another law).

The more bureaucracy we create, the more independence and liberty we give up and turn over to the state. How much personal responsibility are you willing to give up?

The direct application of research changes lives for the better. Beyond the theoretical, practical research addresses real problems and provides solutions.

Researchers strive for this practical application, something a group of Ohio Northern University biology students achieved on March 16, 2011, when they presented their research to Ohio lawmakers debating a potential new law. 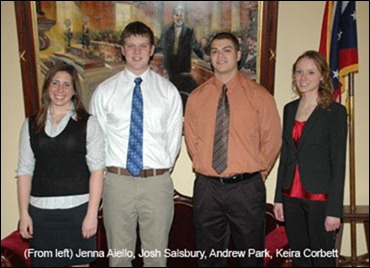 Ohio House Bill 99 would “prohibit driving a vehicle while writing, sending or reading a text-based communication on an electronic wireless communications device” statewide. Offering proponent testimony for the bill, juniors Jenna Aiello, a premed major from Mentor, Ohio; Keira Corbett, a predentistry major from Tipp City, Ohio; Andrew Park, a premed major from Bryan, Ohio; and Joshua Salsbury, a prephysical therapy major from Bryan, Ohio; shared research that showed how text-messaging can impede reaction time by as much as 0.708 seconds, valuable data to those interested in improving public safety.

The research project initiated in the students’ Medical Physiology 1 class, which focused on neuromuscular physiology.

“We knew we wanted to do research on reaction time, but that was kind of a popular topic for the class, so we had to think of our own spin for it to make it different from other ideas,” said Park.

The group also wanted their topic to be relevant as well as unique. After considering a study on the effects of a substance—such as caffeine—on reaction time, they decided that text messaging would be more interesting and just as relevant, if not moreso.

According to a recent national study by the Nielsen Company, young adults (age 18–24) exchange 1,630 texts each month. While that number may seem high, it is a distant second to teens (age 13–17) who exchange an incredible 3,339 texts each month. The students themselves could attest to the prevalence of this behavior while driving, while also noting that most of their peers don’t realize how dangerous it can be.

“Our focus was definitely on the fact that lots of our peers text message and drive,” said Aiello. “Watching the participants, every single one of them would get red in the face trying to text and do the reaction time. And they realized, ‘Wow, this is really important to not do.’”

The group modeled their experiment using a computer-based reaction time test featuring a stoplight that changed from red to green at random. Subjects were asked to press a key on the computer keyboard as fast as they could when the light changed. Then the researchers introduced a text messaging distraction—asking the subjects to respond to questions typed on a slip of pager via text message—while performing test.

“We had 40 participants do five trials each without text messaging and then averaged it to get their reaction time with no distractions. Then we asked them to do it again with the text messaging,” said Corbett.

The students’ experiment showed a 0.708 second increase in reaction time when faced with a text messaging distraction, the equivalent of traveling 68 feet while driving at 65 mph.

The group submitted their findings to The Ohio Journal of Science under the title “Effect of text-messaging distractions on reaction time,” and it was selected for publication in the winter 2011 issue. This article caught the attention of Ohio State Rep. Nancy Garland, the co-author of H.B. 99 who invited the group to testify.

“I was very pleased that the Ohio Northern students participated in the hearings on H.B. 99 that would prohibit driving and texting. I think colleges and universities can provide valuable research to the legislature as we consider legislation,” Garland said.

The students feel that being college students themselves may have played a part in their research being singled out.

“We were thinking about why they reached out to us, and we think it might be because they are trying to reach our age group with this legislation,” said Salsbury.

For the students’ instructor, Dr. Rema Suniga, associate professor of biology, the experience has been a memorable and rewarding one.

“Kiera sent me an email right after being contacted by Rep. Garland’s office, and it was wonderful to see the excitement in her email,” she said.

The students will have one more chance to share their text-messaging research when they present at the Ohio Academy of Science annual meeting in April.