Who should pay more in taxes and what should be cut?

Those of us watching the “dance” in Washington DC over the looming taxes and possible spending cuts closing in on every American can make one’s head spin. What we all know is that our government spends too much and seems unable to even come 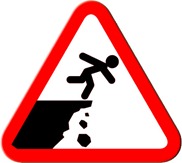 close to balancing their budget or coming up with a plan in order to realistically address it. A couple positives — The U.S. economic engine “could” address the revenue side IF encouraged to grow. Even an increase of 2% in economic grow (over the current 2% growth) could generate enough in tax revenues that would dwarf the tax rate increases demanded by President Obama. So my question is “Why isn’t the focus on growth?” The second positive is that neither Democrat or Republican benefits by going over the fiscal cliff, so there is an incentive to get a deal done before sequestration.

Unfortunately there is a list of never ending negatives. For this post, I point only to the tax rate and structure being trumpeted by President Obama and his merry band of mainstream media groupies. I’m not suggesting that increasing income tax rates from the current 36% to 39.6 for $200,000 and up earners ($250,000 joint) is alone going to sink our country, but don’t think that it solves any of our fiscal problems, nor does it encourage growth or make funding our government any more “fair.”

One of my primary concerns is that there will be an inevitable tax rate change – primarily because it sells well to the average Joe. Unfortunately it creates a long-term growth deterrent. It heavily impacts the small business owners who create the majority of jobs in America. This is the exact group we need to be encouraging in order to get the above mentioned national economy to 4%. These higher taxes seem to be coming at the same time big corporations are lobbying for more competitive U.S. corporate tax rates (which are needed, btw). Most people looking at the chart below understand, as do politicians, that U.S. based corporations are at a disadvantage worldwide. Most agree that putting American corporation on a level playing field with other developed nations make sense and that bringing their rates to somewhere around 25% (or Dems think 28%) needs to be done. 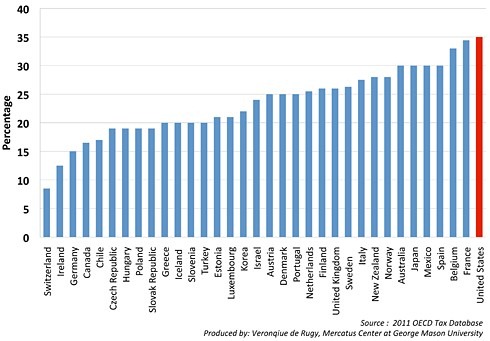 Of course what does this do if you are a “small business” paying taxes at the individual rate is being pushed up to 40%? (not to mention the additional 3.8% plus .9% Medicare tax and their state taxes  — ie. 14% in California.)

So, let’s say rates go up to 40% on top earners and small business … and taxes drop for American corporates to under 30% … what do you think will happen? Isn’t it logical?

Is the “dance” seemingly around higher taxes instead of reducing spending and making government more efficient one worth going to? (of course we don’t have a choice … we are being shoved toward this cliff)