Before there was 9/11, there was Pearl Harbor. Let’s not forget.

“Those who cannot remember the past are condemned to repeat it.”
– George Santayana 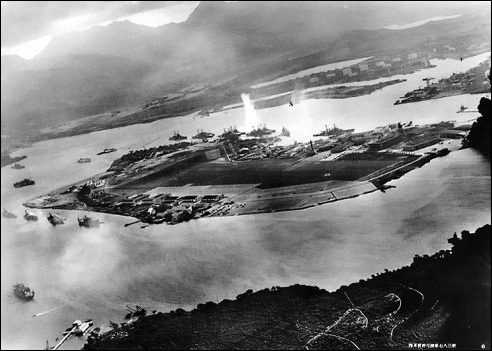 Photograph from a Japanese plane of Battleship Row at the beginning of the attack. The explosion in the center is a torpedo strike on the USS Oklahoma. Two attacking Japanese planes can be seen: one over the USS Neosho and one over the Naval Yard.

Timeline of events leading up to and during the attack.

December 6, 1941
Washington D.C. – The president at the time, Franklin D. Roosevelt, makes one more request for peace to the Japanese. The United States gets no reply. Later on this day the code-breaking service for the U.S. begins to intercept a fourteen part message that was sent by the Japanese. The service deciphers the first thirteen parts and gives them to the President and Secretary of State. After decoding these parts the U.S. believes that a Japanese attack will occur. It is determined that it will probably be in Southeast Asia.

December 7, 1941
Washington D.C. – The last part to be decoded arrives at Washington. At about 9:00 a.m. it is decoded. This states that all diplomatic relations with the United States are to be removed. After about another hour yet another Japanese message is intercepted. This message states that the attack is to begin at 1:00 p.m.

This time in Pearl Harbor is early morning, the U.S. War Department realizes this and trys to get an alert to Pearl Harbor. Radio contact with Hawaii is broken and they are to forced to use a commercial telegraph. Delays in the delivery of the message cause it to be recieved at about noon Hawaii time. This is four hours after the attack has begun.

Near Oahu (Hawaii) – The Japanese fleet commanded by Admiral Nagumo, which consists of six carriers with 423 planes, is about to attack. At about 6 a.m. the first wave of Japanese planes takes off from the carriers located 230 miles north of Oahu. The Japanese planes (183) heads toward Pearl Harbor. Pearl Harbor – At precisely 7:02 a.m. two army radar operators detects a large number of planes coming in. They contact a Junior Officer. Since they are expecting B-17 planes from the western continental U.S. they are told to ignore it and the Junior Officer disregards the report. Near Oahu – At about 7:15 the second attack wave of 167 planes takes off from the carriers. They also head for Pearl Harbor. Pearl Harbor – At 7:53 a.m. the first Japanese wave arrives. It consists of 40 Kate torpedo bombers, 51 Val dive bombers, 43 Zero fighters, and 50 high level bombers. They start the attack, the United States is completely unprepared, the Anti-Aircraft guns are unmanned, and the torpedo nets are not deployed. The Japanese lose only 27 planes and five midget submarines. Eight American battleships are damaged, five are sunk. Luckily, the main targets, the U.S. aircraft carriers are not in port. Many are killed and wounded, 2,335 servicemen and 68 civilians are killed. There are 1,178 wounded. Almost half of the casualties came from the USS Arizona which had 1,104 killed when a air bomb that weighs about 1,760 pounds penetrates the ship and causes massive explosions. Washington D.C. – Delays cause Japanese diplomats to present their declaration of war to the United States after reports start coming in about the attack. The news of the attack removes almost all opposition in the U.S. to get into WWII. The next day the U.S. and Great Britain declare war.