Ten aeronautical advancements thanks to NASA

The Dryden Flight Research Center posted ten technology examples on their site that made a big impact on aviation. Most assume NASA has contributed to our science and engineering advancements, but the debate continues over the the high cost of the taxpayers through government funding the NASA research centers or if the private sector can achieve similar results more efficiently. 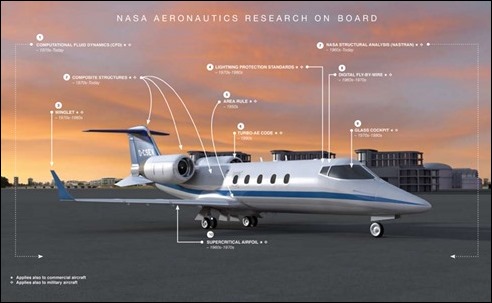 1. Computational fluid dynamics – During the 1970s, NASA developed sophisticated computer codes that could accurately predict the flow of a fluid using complex simulations, such as air over an aircraft’s wing or fuel through a space shuttle’s main engine.
Those codes became computational fluid dynamics, or CFD, which today is considered a vital tool for the study of fluid dynamics. CFD greatly reduces the time required to test and manufacture nearly any type of aircraft.

2. Composite structures – NASA first partnered with private industry during the 1970s to conduct research on how to develop strong, nonmetallic materials that could replace heavier metals and aluminums on aircraft.
Composite materials have gradually replaced metallic materials on parts of an aircraft’s tail, wings, fuselage, engine cowlings, and landing gear doors. Using composite materials can reduce the overall weight of an aircraft and improve fuel efficiency.

3. Winglets – During the 1970s and 1980s, NASA studies led to the development of vertical endplates, or "winglets," that are now seen on many aircraft wings. This innovation is the first of three efforts on this list that were led by NASA Langley Research Center’s pioneering scientist Richard Whitcomb, who was chief of the Transonic Aerodynamics Branch at Langley in Hampton, Va.
Winglets reduce vortices and drag, thereby improving airflow and fuel efficiency. The first aircraft to adopt winglets were within the general aviation and business jet communities. In the mid-1980s, Boeing produced the 747-400 commercial jetliner, which used winglets to increase its range.
A winglet flight test program at the NASA Dryden Flight Research Center, Edwards, Calif., in 1979-80 first validated Whitcomb’s research when the test aircraft – a military version of the Boeing 707 jetliner – recorded an increased fuel mileage rate of 6.5 percent.

4. Lightning protection standards – During the 1970s and 1980s, NASA conducted extensive research and flight tests to identify the conditions that cause lightning strikes, the types of currents, and the levels of threat.
The research confirmed the data that were incorporated into design guidelines that are used in new aircraft and in flight operations to protect critical digital systems.

5. Area rule – In the 1950s, Whitcomb discovered one of the most revolutionary aeronautics technologies when he researched "area rule," a concept that helped aircraft designers avoid the disruption in airflow caused by the attachment of the wings to the fuselage.
Whitcomb deduced that removing the equivalent wing cross-sectional area from that of the fuselage cross-sectional area avoided the abrupt bump and improved the distribution of flow across the longitudinal area of the aircraft. By using the area rule, aircraft designers for decades have been able to allow aircraft to fly higher, faster, and farther.

6. Turbo AE code – During the 1990s, NASA developed a computer code that generates two-dimensional simulations of potential aeroelastic problems that can occur in jet engine blades. Such problems include flutter or fatigue that can eventually cause engine fan blades to stall or fail.
With TURBO-AE, engineers can more efficiently design thinner, lighter, faster rotating blades for today’s jet engines built for higher performance, lower emissions and lower noise.

7. NASA structural analysis (NASTRAN) – In the 1960s, NASA partnered with industry to develop a common generic software program that engineers could use to model and analyze different aerospace structures, including any kind of spacecraft or aircraft.
Today, NASTRAN is an industry-standard tool for computer-aided engineering of all types of structures.

8. Digital Fly-By-Wire – During the 1960s and 1970s, Dryden researchers developed and flight test the digital fly-by-wire system, which replaced heavier and less reliable hydraulics systems with a digital computer and electric wires to send signals from the pilot to the control surfaces of an aircraft.
The F-8 Digital Fly-By-Wire flight research project in 1972-73 validated the principal concepts of all-electric flight control systems now used on nearly all modern high-performance aircraft and on military and civilian transports. It was the forerunner of current fly-by-wire systems used in the space shuttles.

9. Glass cockpit – During the 1970s and 1980s, NASA created and tested the concept of an advanced cockpit display that would replace the growing number of dial and gauge instruments that were taking up space on an aircraft’s flight deck.
Called a "glass cockpit," the innovative approach uses flat panel digital displays to provide the flight deck crew with a more integrated, easily understood picture of the vehicle situation. Glass cockpits are in use on commercial, military, and general aviation aircraft, and on NASA’s space shuttle fleet.

10. Supercritical airfoil – During the 1960s and 1970s, Whitcomb led a team of researchers to develop and test a series of unique geometric shapes of airfoils, or wing designs, that could be applied to subsonic transport to improve lift and reduce drag.