Contemplating an iOS9 install. On the other hand, maybe not? 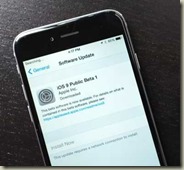 now, but since I’ve been traveling the last couple weeks, the temptation to install while away was not all that powerful, so I decided not tempt fate. That probably a good thing since a few tech people I follow, and respect, have not had such a positive experience (Apple did warn). Again, this is pre-release stuff and not for the faint of heart.

Lauren Goode’s article on Recode.net gave me pause as I started thinking about giving it a try this weekend. Maybe I’ll wait?

… iPhone users have had previous complaints about losing cell service after iOS updates.

To be clear, I never got to the point where I was running iOS 9 on the phone. After waiting from around noon until 1:30 pm for the software to download, I received an error message: Unable to Install Update. I took a phone call shortly after that, and then tried, again, to install the update. 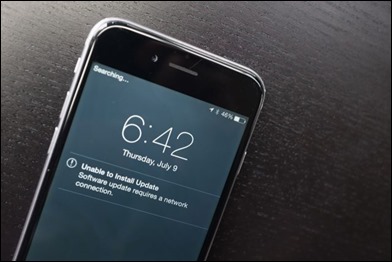 Suddenly, I had no network connection. I tried a hard reset of the phone. Where Verizon Wireless would normally show me a few dots and maybe an LTE signal, it said “Searching….” For hours.

(I took a train home. I had no cell service. No Wi-Fi, no personal hotspot, nothing for more than an hour. No text messages, email or streaming music. I looked out the window. I took a short nap. I wondered what news I was missing. It was life before the smartphone!)

Once home, I tried resetting the phone’s network settings. I popped out the tiny SIM, then loaded it back in again. Still no service.

For more, read the rest at recode.net: Learned the Hard Way: Don’t install iOS9 Beta on Your Primary iPhone