Before there were Harley-Davidson Hogs … 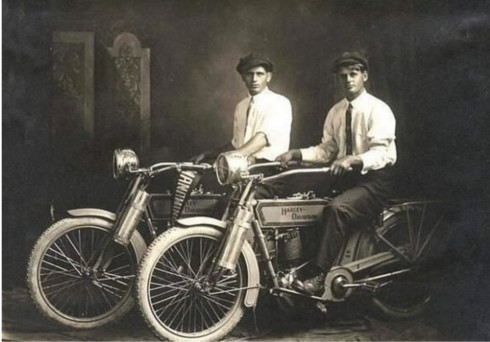 William Harley and Arthur Davidson, founders of Harley-Davidson, with their motorcycles in 1914.

Origin of “Hog” nickname
Beginning in 1920, a team of farm boys, including Ray Weishaar, who became known as the “hog boys,” consistently won races. The group had a hog, or pig as their mascot. Following a win, they would put the pig (a real one) on their Harley and take a victory lap. In 1983, the Motor Company formed a club for owners of its product taking advantage of the long-standing nickname by turning “hog” into the acronym H.O.G., for Harley Owners Group. Harley-Davidson attempted to trademark “hog”, but lost a case against an independent Harley-Davidson specialist, The Hog Farm of West Seneca, NY, in 1999 when the appellate panel ruled that “hog” had become a generic term for large motorcycles and was therefore unprotectable as a trademark.