Federal Income Taxes – what changes are in store for 2017?

Unless you’ve had your head in the sand pile, you know that there is a shake-up happening in Washington DC since the election of President Donald Trump and his taking office less than 1 month ago. Much of the economic optimism seen by new records on Wall Street, job incentives and both interest rates and inflation ticking up are due to a more friendly business climate coming from our Federal government. I see it as government partnering with business rather than against it … even if it is only optics, it should stimulate growth.

Much of the optimism comes from fewer regulations and lower taxes … and the big one that impacts every taxpayer is lower individual federal income tax rates. How much you ask … well because the president has disclosed his thoughts, let’s start there, but be warned, congress has their own ideas and they are very likely to get bogged down in the details. I would be great if we could at least the proposed 3 rates instead of the existing 7, but it is likely to take until the fall of 2017 … or maybe even 2018 before a bill gets to President Trump (we can only dream that this kind is simplicity is carried forward thru the entire tax code). 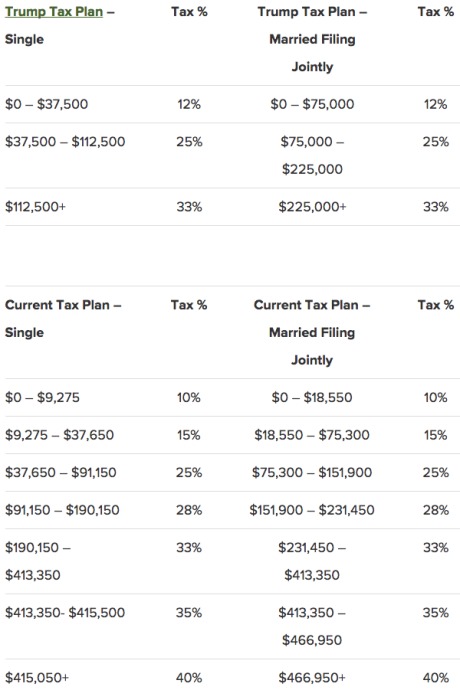 There are real winners and those unchanged … but if there is simplicity, we all win. Currently, unless there are changes to the deductions and credits, those earning smack dap in the middle … currently taxed at 25% … there will unlikely be much to notice. Many on the “struggling at the low end of the income scale” will likely see a few dollars knocked off their tax bill and those over $413,000 will see considerable tax savings … of course they still pay the most in taxes too. All in all, simple would be better. Get this to a postcard return and then congress would have something to brag about … but I’m not holding my breath.