An interview with Dr Francis Collins triggered a book order 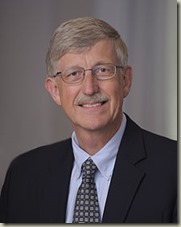 While driving this week I had a opportunity to scan through a few SiriusXM stations and picked up on part of a Bloomberg interview between philanthropist David Rubenstein and National Institutes of Health director Dr. Francis Collins (looked up the video so I could listen to the entire interview later – below).

Dr Collins seemed extremely bright and humble … and quickly captured my interest … and even more so when talking about how he came to Christianity. Like CS Lewis, Ron Carlson and Lee Strobel, the story was even more intriguing coming from such a bright scientist. So much so that I ordered a hardcopy of his 2006 book, The Language of God: A Scientist Presents Evidence for Belief, just so

I can lend it out.

I’m sure I’m not the only Christ follower who appreciates well respected doctors and scientists that are comfortable embracing faith and having a willingness to publicly share it … at risk of being academically ostracized. If someone as brilliant as the guy who heads the 20,000 people who research at the NIH, under both Democrat and Republican presidents, and previously head of the Human Genome Project to its completion, concludes there is a God and Christianity makes perfect sense to him, then I shouldn’t stumble when belittled by academics and science types wondering how I could have faith in an unseen and unprovable God of the universe (hence "faith"). It is far easier for those of us who are not PhD science educated to defend our faith knowing we are in such bright company knowing there are a few science geniuses following Christ too.