Disruptors in the health care business – then and now #TBT

From the inside I have watched the disruption in healthcare for decades now.

Early on it was Brenda and our somewhat laughable attempt in thinking we could start an independent mail order pharmacy, this was in the early 1990s. We looked at leasing property and duplicating existing “store” pharmacy components of a drugstore and at the time using the mail and phone technology as our customer interface (remember this was pre-Internet).  Brenda was a pharmacist and I was growing a printing and publishing business focused primarily the repeat printing of catalogs and monthly newsletters. “Mail order” was the “disruptor” of the day in retail and was successfully biting off chunks of the retail business by keeping overhead lower. Of course there were a few hurdles with our poorly thought out plan and thankfully we didn’t sign a lease or “mortgage the farm.”

Not long after though, Revco the local drugstore chain Brenda worked for DID decide to offer mail order and had signed up several larger companies. Brenda was picked (we lived local) to run this “mail order pharmacy” in  a corporate  warehouse. 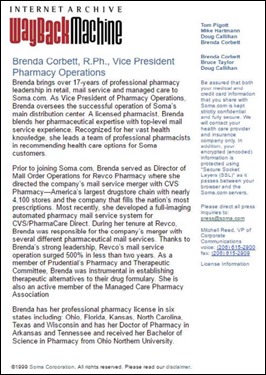 To expand Brenda worked with consultants who were still learning the business as well.  I was included in meeting with them (free dinners!) and was able to help out with several areas including facility design (my Master’s thesis), programming, imaging and barcoding totes for order tracking. The concept was profitable, but the industry was rapidly changing with established and bigger companies starting to make inroads into the business. I can still remember finding out that several of my spreadsheets and data gathering processes were used by the consultants when they were hired by others (hmm?).  Thankfully this new knowledge and multiple Rx licenses in different states, help Brenda stand out as mail order pharmacies rapidly expanded and opened the door to opportunity. Strange as it seems, when the dot-com era exploded, this early on experience helped her get back in the workforce after taking some time off. It gave her an exciting opportunity to on the ground floor of the first Internet Pharmacy … eventually purchased by CVS.com. I can remember the Seattle founder of Soma, Tom Pigott, talking highly of Jeff Bezo and his vision for Amazon back then … when it was an expanding online bookstore.

Now in 2018, decades after the earlier disruption, there are some major changes in healthcare by the “bigs getting bigger” (ie. CVS acquiring Aetna) … although it has really never slowed down – we’re just not directly impacted or involved.

BUT … my daughter, her husband and his family may be a bit more involved …

The WSJ ran an article on April 2, 2018 quoting Randy Oostra, president and CEO of ProMedica in Toledo, Ohio regarding mega-mergers such as Walmart and Humana.

“What worries us is death by a thousand cuts,” he said. “Another deal and another deal.”

ProMedica, which operates 13 hospitals in Ohio and Michigan, is looking to diversify its revenue with international expansion and new businesses, he said.