Predicting the end of the bull market and how to prepare 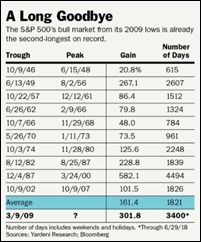 As the current bull stock market gets long in the tooth (average is 7 years, we’re now closing in on 9 years), financial analysts are beginning to write regularly about preparing for the next slowdown. Few are declaring it over at this moment, but most advise prudence as it comes to what investments are being held.

A couple articles I’ve been looking at point to the #TariffTiff (I like that term) that seems to be part of President Trump’s negotiation with U.S. trading partner countries as leverage. Depending on your point of view (pro or anti-Trump), you either think he is using tariffs to gain leverage or is foolishly willing to see things escalate into a #TradeWar believing the U.S. ends up winning — personally just as with any war, there will be casualties on both sides. Hopefully cooler heads will prevail and the U.S. will just end up with "fairer" trade deals in the end? 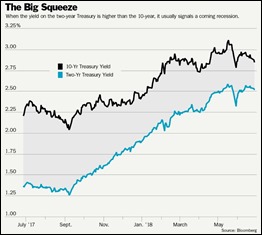 Back to predicting the end of the bull market. Barron’s in their June 30, 2018 article points out that "the economy has been juiced by the tax cuts and fiscal-spending package that Congress passed at the end of 2017—a stimulus that should last another year or so." As interest rates rise and the Fed shrinks its $4 Trillion dollar balance sheet, the economy will no longer have the stimulus. "Put them together and you have a drag big enough to slow the economy, while stamping a bright expiration date on the bull market: 2020."

And it isn’t just permabears who are gloomy of late. Ben Bernanke, the former chairman of the Federal Reserve, recently said that after two years of stimulus, “in 2020, Wile E. Coyote is going to go off the cliff and is going to look down.”

Even less-pessimistic economists and market watchers acknowledge that economic expansion will slow in 2020, while corporate profits, though still increasing, will do so at a slower pace than they had previously. Global economic growth could also feel the pinch if the European Central Bank begins raising interest rates toward the end of 2019, as it has suggested it might. These conditions are far different than what has existed in the bull market. 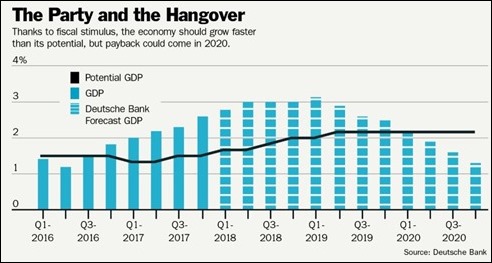 Much of the talk in economic circles is in regard to an accurate "predictor" of bear market — that being an inverted yield curve. We are not there yet, but the convergence of short term and long term treasuries has moved much closer. Barron’s gave a good explanation:

In good times, the longer-term yield should be higher than the shorter because it means a bank can borrow at the lower short-term rate and make money lending at the higher longer-term one. When short-term yields rise above long-term ones, there’s no incentive to lend, and that “inverted yield curve” has typically preceded a recession by six to 24 months.

So … now that we know the end is closer than it was and that we are currently in a #tradetiff, how do we prepare for the inevitable slowing of the economy … if not a steep market drop leading us into a recession? Traditionally investors shifted to bonds for safety along with precious metals. Neither seems to be attractive at the moment, even if adding them steadily to a portfolio might be wise. CNBC published a article recommending U.S. based utilities or sector ETFs like $XLU. The thinking is that steady dividend income and protection from a #TradeWar could be had with utilities. Another recommendation would be the traditional defensive stocks that are domestic and consumer oriented — I’ve been adding $PG and $CVS, but am concerned their exposure worldwide could be a negative? 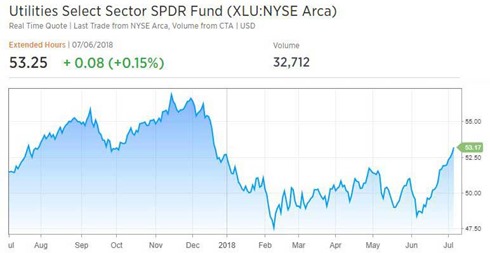 The best advice is to at least start thinking that the party will end and invest new money with caution. Perhaps consider CALL options as a way to at least protect stocks you aren’t quite ready to sell (just my thoughts)?