Tech Friday: The challenges of policing speech on social media

There are challenges from users and governments facing several of the companies who make money advertising to the millions of eyeballs and the marketing of users personal data. We all want “free services,” but most people dislike the collection and selling of their personal data or having to sift through advertising … especially when it emulates a news or personal feed. BUT … besides the privacy issues associated with high profile social media sites like Facebook and Google, there is the recent mandate that they step-up their game when it comes to what users share on their platforms. Google’s YouTube component has been hammered with what shows up “next” in “kids” feeds to the point the company has moved to create a “playground” if you will of kids safe videos. The plan is that questionable content would not show up on a YouTube stream (good luck with that considering the billions of videos with embedded content – the algorithms better be good). This entire screening has taken on “policing speech” duties for supposedly non-biased employees who write the code to automatically screen and for “people” to make judgmental decisions.

Since I’m primarily only on Twitter, I’ve noticed the pro-active efforts that might be succeeding, but also has created a outrage when screeners without notice or any

arbitration have locked out users (their prerogative I suppose?). To understand the challenge would be to know and notice some of the high profile users who have lost their privileges. It has been heavily skewed towards provocative conservative speech, but for Twitter’s part they claim their evolving rules are protecting people, classes of people and groups from “hateful conduct” (a fairly broad and encompassing term).

“After months of conversations and feedback from the public, external experts and our own teams, we’re expanding our rules against hateful conduct to include language that dehumanizes others on the basis of religion,” the company wrote on its Twitter Safety blog. 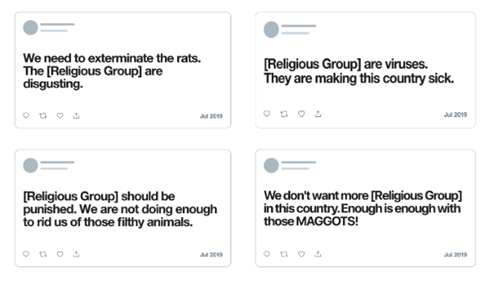 Personally, I don’t have an issue with being civil on Twitter …BUT some of the policies and accepted views coming out of Silicon Valley aren’t representative of me or of the rest of the country (let alone everywhere else in the world). When it comes to debating issues like abortion, drugs, illegal immigration, President Trump, gender identity or sexual orientation, the Second Amendment, religious views, etc  – especially when things get heated – more times than not, the policing comes down harder on conservatives expressing their views. The choice of language and images that bothers one “group” doesn’t bother another … and the Twitter values may not be appropriate or be seen as commonsense everywhere in the world.  I understand the objective, just not the implementation I’ve been seeing by the arbitrators when it comes to targeting conservatives in the US.

Abuse/harassment: You may not engage in the targeted harassment of someone, or incite other people to do so. This includes wishing or hoping that someone experiences physical harm. Learn more.

Sensitive media, including graphic violence and adult content: You may not post media that is excessively gory or share violent or adult content within live video or in profile or header images. Media depicting sexual violence and/or assault is also not permitted. Learn more.

Non-consensual nudity: You may not post or share intimate photos or videos of someone that were produced or distributed without their consent. Learn more.

Platform manipulation and spam: You may not use Twitter’s services in a manner intended to artificially amplify or suppress information or engage in behavior that manipulates or disrupts people’s experience on Twitter. Learn more.

Election integrity: You may not use Twitter’s services for the purpose of manipulating or interfering in elections. This includes posting or sharing content that may suppress voter turnout or mislead people about when, where, or how to vote. Learn more.

Impersonation: You may not impersonate individuals, groups, or organizations in a manner that is intended to or does mislead, confuse, or deceive others. Learn more.

Learn more about our approach to enforcement, including potential consequences for violating these rules or attempting to circumvent enforcement, as well as how to appeal.

You may not submit, post, or display any video content on or through our services that includes third-party advertising, such as pre-roll video ads or sponsorship graphics, without our prior consent.

Note: we may need to change these rules from time to time in order to support our goal of promoting a healthy public conversation. The most current version is always available at https://twitter.com/rules.