Can stamps get you in the Christmas spirit? #random

While trying my best to get in the Christmas spirit … how about something from the philately world? Although I’m not a stamp collector, back in the day my company Consolidated Printing and Publishing did some plate work for special cancels and printing for a stamp collecting organization. 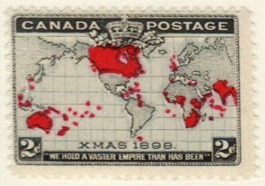 Besides, my father-in-law had an impressive stamp collection (that reminds me to check on it with my sister-in-law).

Anyway … here’s what his considered the first Christmas Stamp.

On December 7, 1898, Canada issued what many consider to be the world’s first Christmas stamp.

In 1898, Imperial Penny Postage was established in Canada, lowering the postage rate from 3¢ to 2¢.  New stamps were needed, and it became Postmaster General William Mulock’s duty to present the design to Queen Victoria for approval.

The new stamp featured a world map with Great Britain’s territories highlighted.  Mulock reportedly suggested issuing the stamp on November 9 “in honor of the prince [of Wales],” but Queen Victoria made her displeasure known immediately, replying “what prince?”  She and her oldest son had a notoriously rocky relationship since Prince Albert’s death in 1861.  The Queen is said to have blamed her son and the stress caused by his “playboy prince” reputation for his father’s death.