Are US presidents “rock-stars” based on political ideology? 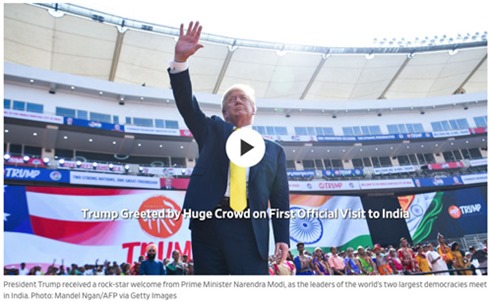 It is shocking to see the “rock-star welcome” (or thumbs down reception in socialist leaning countries) that “recent” American presidents get when they are overseas. I said “recent American presidents” in respect for the popularity President Obama had when traveling in the leaning countries of Europe; he was seen as tilting the U.S. to the left and more like them  … but have to admit, President Trump is received well by people who still embrace independence from government, individual freedom and fair market-based capitalism as a preferred way of life and improving overall quality of life. 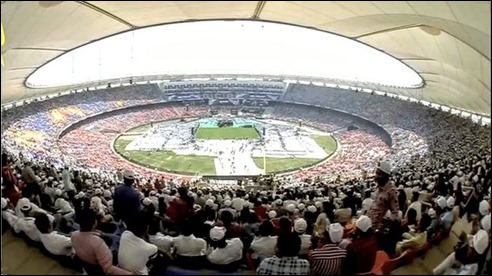 Trump just filled the world’s largest cricket stadium with over 100,000 people in India.

AHMEDABAD, India—President Trump kicked off two days in India with a huge campaign-style rally in the home state of Indian Prime Minister Narendra Modi, a reprise of a raucous event the pair staged in the U.S. last year, and a visit to the Taj Mahal with the first lady.

Mr. Trump and his wife, Melania, were greeted at the airport by women in traditional attire dancing with water pots on their heads and men playing the trumpet and drums, along with other artists from every corner of India. They drove past giant cutout images of the two leaders. People carried balloons and wore T-shirts emblazoned with the names of the two leaders and masks of their likenesses.

On the way, the pair stopped at the spiritual center where Mohandas K. Gandhi, better known by the honorific title Mahatma, lived. It is now a museum and national monument dedicated to the person that many Indians revere as the “father of the nation” for his role in leading India to independence from British rule through the use of nonviolence.

Mr. Trump signed the guest book with an upbeat message to “my great friend Prime Minister Modi, Thank you for this wonderful visit!”