My friend Jeff gave me a couple “used” books for Christmas this year after we talked last year about our favorite authors and books over the decades. Sloan Wilson, of “Man in the Gray Flannel Suit” fame, 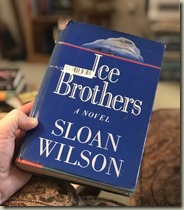 also wrote several World War II US Coast Guard and Merchant Marine novels that both of us read and discussed in the 1980s (our mini 2-person book club). I had forgotten the actual story lines so recently am enjoying reading them again, besides I’ve always been a big fan of factual-fiction as it pertains to military and nautical history.

Ice Brothers is the first of the two books … although am currently reading Pacific Interlude … and the story coincided with me reading a question posed about the RMS Titanic and last lifeboat photos. I’m a long time user and occasional reader of Quora.com so in seeing this question, I was off down the rabbit hole reading the interesting answer. 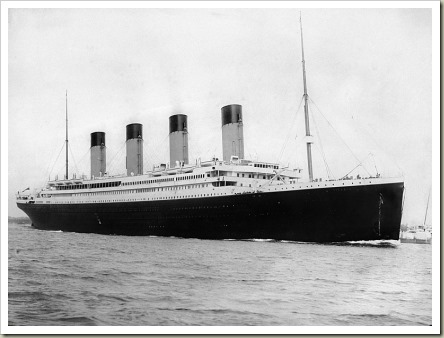 How was it possible for a photograph of the last lifeboat off the Titanic to survive?

Photographs of Titanic’s lifeboats were taken from the rescue ship Carpathia as she picked up survivors and brought the lifeboats aboard the morning after the disaster. They were developed after Carpathia returned to New York and sold to the news media or otherwise preserved.

There are no photographs of either Titanic or her lifeboats taken at the time of the sinking or from the lifeboats themselves. The technology of the day was not capable of it, and none of the survivors would have thought to bring a camera and all its associated apparatus with them, even in the unlikely event that they owned one.

The answer above that Woody Hancock gave was no doubt complete, but the later post by Dave Nitzer was the more interesting read .. and it had photos.

The Titanic was photographed quite a bit in the days before her departure, and of course those were left onshore, and did not go down with the ship.

Dozens more photographs were taken as the passengers were being rescued. Travelers on the Carpathia who had slept through the night woke up to play an unexpected role in history and those who had the presence of mind to get their cameras recorded the rescue efforts. Plenty of photos were taken that morning ; do a google search for “Titanic lifeboats.” Here are just a few:

Lifeboat #6, which carries the “unsinkable Molly Brown,” approaches the Carpathia; that is Quartermaster Hitchens standing upright at the tiller – the very QM who was steering the wheel when Titanic struck the berg, and who famously told the women in his lifeboat to shut up; that he was in command and it was their job to row. 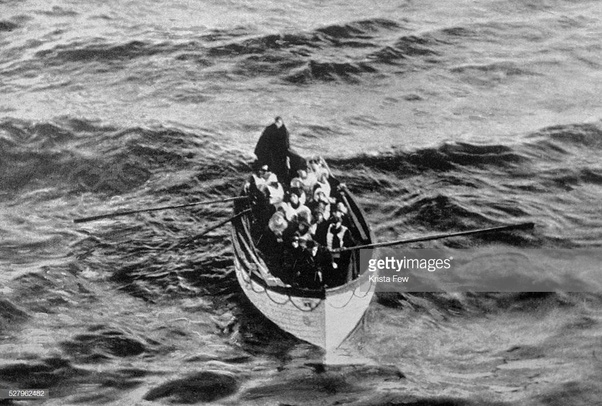 Note that Boat #6, being one of the early boats to leave Titanic, is more than half empty. Carrying 28 survivors, she had remaining vacant seats for another 36.

Below, Lifeboat #14 approaches the Carpathia, towing Collapsible Boat D behind. That’s Fifth Officer Lowe standing at the stern of Boat 14, which was the only boat to attempt to go back to the wreck to find survivors. Officer Lowe’s boat was also the only one that assembled the mast and sail and put it to use.

If you squint hard at the horizon, especially towards the right hand side of the photo, you can just barely make out the enormous ice floe that Titanic had been approaching at nearly full speed. 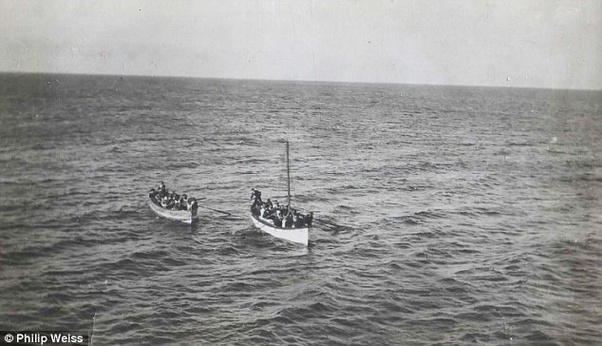 And a heavily re-touched photograph of the ice field as seen from the decks of the Carpathia while the rescue was still taking place. 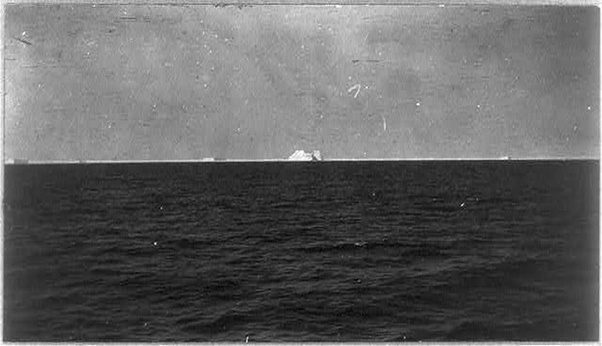 In the photo below, lifeboat #12 has come alongside the Carpathia and survivors are preparing to climb aboard via the rope ladders.

One boat in the next photo has already been emptied of its passengers, while the other prepares to make fast to the Carpathia. The emptied lifeboat will be rowed to the stern of the Carpathia and be hauled on deck, to be returned to the White Star Line four days after this picture was taken. 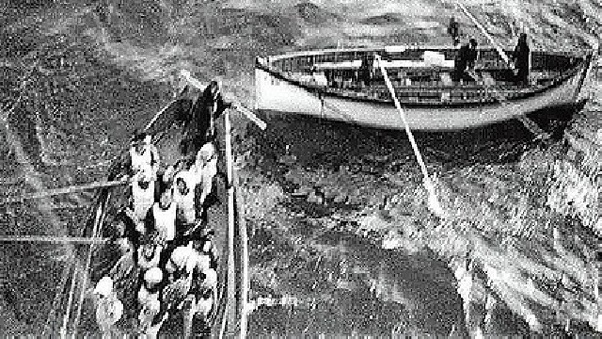 Collapsible Boat D was the last lifeboat to be lowered from Titanic properly, barely 15 minutes before the ship went under.

In the photo below, Collapsible Boat D has been released from Officer Lowe’s tow line and is approaching the rescue ship. Leaning out over the bow is Hugh Woolner, next to him is Lt. Steffanson Bjornstrom of Sweden. They were first class passengers who jumped into the boat as it was being lowered past them on A deck, which had just begun to flood at their feet. 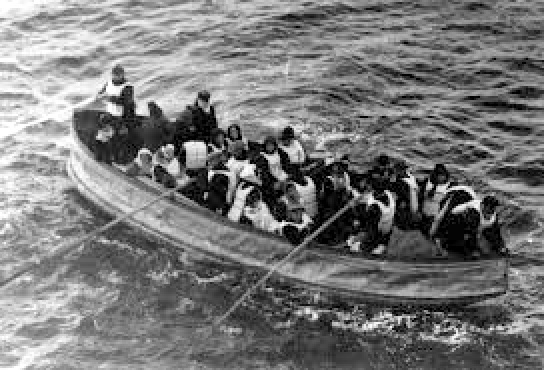 Woolner spent part of the night feeding cookies and biscuits to a pair of French boys, ages 2 and 4, whose father had placed them in the boat but was refused permission to accompany them. Their mother was not onboard Titanic; their father had kidnapped them hoping to induce her to emigrate and join them to live in America. The older boy remembered his father saying “Suis brave, mes enfants; à bientôt. Ditez a ta mere que je l’aime. Papa vous aime a jamais.” (“Be brave, my boys; I’ll see you later. Tell your mother I love her. Papa loves you, always.”)

Their mother eventually saw their pictures in the papers, where they were identified only as ”the Titanic orphans.” Here she is shown reunited with them in New York one month after the disaster.

Two collapsible boats remained on deck, but time ran out: the Boat Deck submerged before they could be loaded and launched. These floated off the deck, one upside-down and the other swamped and filled with sea-water but still afloat. A few lucky swimmers found those in the darkness and survived the night by using them as rafts. These two collapsible boats were found still afloat by ships passing near the area, weeks after the disaster

And finally, this might be a photograph of the most famous iceberg in history. A member of the crew of a ship passing through the area the next day took this photograph, not because of the Titanic disaster – he hadn’t heard the news yet. He took this picture because of what seemed to be a streak of red paint that ran along the iceberg’s base. 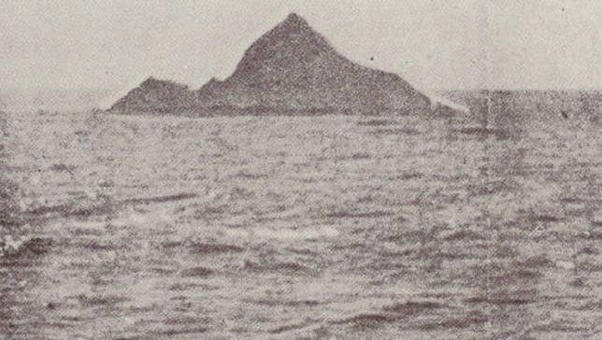 So., for the OP who asked how it was possible to have pictures of the Titanic’s lifeboats… now you know the rest of the story.

Historians and researchers Bill Wormstedt, Tad Fitch, Samuel Halpern, George Behe (I trust their work), along with many other dedicated researchers, have painstakingly analyzed survivors’ accounts to create a detailed timeline of the launch and rescue of the lifeboats in an effort to resolve many of the conflicting accounts.

Lifeboats of the RMS Titanic – Wikipedia