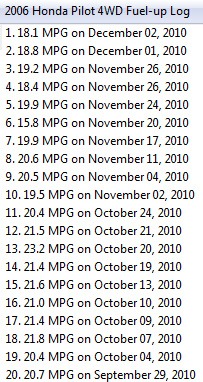 My 2006 Honda Pilot has been rock solid for 120,000+ miles, but it looks like all good things come to an end and it might be time for some overdue maintenance. Oh, I’ve done the routine stuff, but I have neglected to replace the plugs at about 100K and haven’t tackled the belts including the dreaded $700 timing belt with waterpump, tensioners, etc.

The warning sign arrived about a month ago  after boasting on my blog when I noticed the fuel economy slipping from its normal 20-21 mpg number to about 18 mpg (see mid-November on my Fuelly chart right). I didn’t think much about it since the weather was turning cold until the check engine light popped on. A quick run to my buddy with a scanner and he noticed a misfire … to which I ‘optimistically’ thought … “maybe I filled with some bad gasoline?”

After adding a little Heet (methanol) in hopes to dry out any water and driving another tank after clearing the light, the check engine light along with a couple other idiot lights popped back on. Hmm … I think it’s time for at least a tune up … but the expense of a timing belt  will just have to wait until after Christmas.