It is hard to believe my little girl is almost Dr. Katelyn

Today marks my daughter Katelyn’s final residency interview (see 2006 White Coat) as she moves one step closer to finding out where she’ll be spending the next few years working (actually it’s a “second-look” interview). It has been an exciting few months watching her travel and listening to her comments regarding the different pediatric residency programs. Most of her interviews have ben in the midwest during the last couple of months and it has been nice having her around more often between interviews. Her interviews have included hospitals in Ann Arbor and Grand Rapids MI; Akron, Dayton, Columbus and Cleveland OH; Buffalo and Rochester NY and Lexington KY.

The big day will be Residency Match Day (NRMP) on March 17, 2011 where all M.D. programs around the country participating in the National Residency Matching Program are announced. The exciting day almost makes her NEOUCOM medical school graduation a non-event.

The next important deadline for my daughter is for her to rank the programs she prefers while hoping that they also rank her equally. Besides getting the paperwork submitted by the deadline, she’ll also be getting prepared to spend the month of February working in California at a hospital associated with Stanford University School of Medicine. I can’t believe her school education is coming to an end. 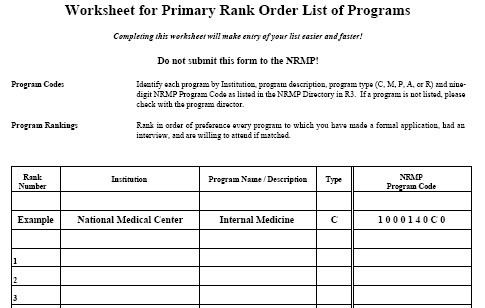