Thanks for sharing this article Tim. Jon Kitna is still one of my favorite Bengals quarterbacks — he earned respect both on and off the field … and continues as a high school math teacher “by choice.” A great guy for all to look up too. 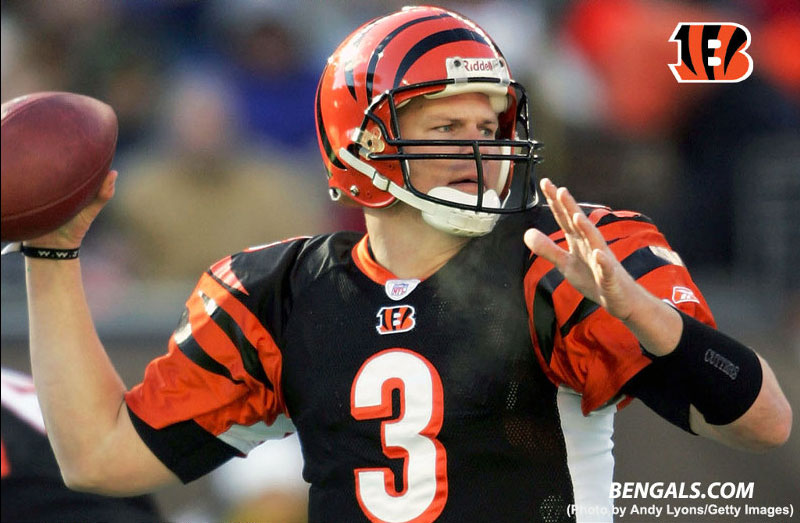 TACOMA — “We’re working,” Jon Kitna says. “We’re working.”
It’s his first-period math class at Lincoln High School, and yes, Kitna is working. Has been since 7 on this Thursday morning, which is when Kitna walked onto the campus of the high school he once attended, past the statue of Abraham Lincoln and into Room 102 carrying a bag full of McDonald’s breakfast sandwiches.

He will spend the next three hours in this classroom on Tacoma’s east side where the clock remains stuck at 1:44. The man who spent the past 16 years studying X’s and O’s as an NFL quarterback will spend three periods explaining x to the fifth power among other assorted math quandaries.

You might have heard Kitna retired. Well, that’s not true. He’s just not playing football anymore. The NFL career he never expected is over, and he’s now in his first year teaching math and coaching football, which is exactly what he hoped to do when he left college in 1996.

Quarterbacks from Central Washington University don’t usually move on to the NFL. Not even the really good ones, and as great as Kitna was, he graduated with a degree in math education and had every expectation his next gig would be in a classroom and not under center. He applied for his first teaching job before he signed with an NFL team.

How did a man who played 16 years of professional football and made millions of dollars wind up — voluntarily — in a classroom at the most impoverished high school in Pierce County? It’s a tough question. One that Kitna himself can’t really answer, not even with one of those equations he throws at his students.

He doesn’t know when he decided he was going to do this, because he can’t remember a time when this wasn’t part of his plan.

“I never knew I wasn’t going to do it,” Kitna said.

Which is why one of the most successful NFL quarterbacks to come out of this state shows up early in a collared golf shirt, his hair still buzzed so close you can see scalp, bringing a bag of breakfast for his students.

Understanding Kitna’s conviction about this position requires you go back to when he first applied for the job.

Bill Milus — who coached Kitna at Lincoln — had retired, and Kitna applied for the job the month before the Seahawks signed him as an undrafted free agent. He was an NAIA All-American on a national championship team and perhaps fortuitously was college teammates with the nephew of Dennis Erickson, the Seahawks’ coach at the time.

Kitna spent 1996 on Seattle’s scout team instead of in a Tacoma classroom. It was the starting point for a pro career as unlikely as it was impressive. He was World Bowl MVP while playing in Europe, a backup to Warren Moon and the first starting quarterback for Mike Holmgren in Seattle. He started 124 NFL games, playing for the Bengals, Lions and Cowboys after leaving Seattle in 2001. He passed for almost 30,000 yards.

Plenty of people say they won’t let the NFL change them, but Kitna demonstrated that. Football was a career; teaching was a calling.

“I didn’t marry an NFL quarterback,” says Jennifer, his wife of 18 years. “I married a teacher and a coach.”

Jon Kitna used to talk about taking some time off after he stopped playing. At least a year, maybe two. But then Jennifer began to notice that the longer her husband played, the shorter the amount of time he talked about taking off.

All of that explains how the Kitnas wound up at a coffee shop on South Ninth Street and Broadway in Tacoma last November, meeting with Pat Erwin, Lincoln’s principal. Kitna was the Dallas Cowboys’ backup at the time, his second year with the team. He suffered a back injury earlier that month in practice. A bulging disk that he’d had for years had become a herniated disk, and Kitna had decided that 2011 would be his last year in the NFL.

“We weren’t the only school that was interested in Jon,” Erwin said.

But there wasn’t going to be a better fit than Lincoln. Mike Merrill — Lincoln’s previous football coach — became the athletic director, and the school didn’t hire a coach so much as it staged a homecoming when it introduced Kitna.

“If it was going to be in the city, it would have been real hard for it to be anywhere besides here,” Kitna said.

Here at the school he once attended, as did his parents. Here at a school that hasn’t made the state playoffs since 2003 and had the same weight room that Kitna used when he attended.

His son, Jordan, will enroll at Lincoln as a freshman next year, becoming the third generation of Kitnas to attend the school.

So after he was introduced in January, Kitna came to Erwin and said he and his wife wanted to buy all new equipment for that weight room. Fantastic, said Erwin, but first they’d have to go to the school board to get approval since the project was going to exceed $50,000.

One problem, Kitna said: “I already bought it.”

On Feb. 24, they got permission to install the weight-room equipment that by then was already waiting in the trucks outside. And so the heavy lifting of building Kitna’s program started.

“Greatness in these halls”

“Charles, how much do you weigh?” Kitna asks.

He’s talking to a sophomore who stopped by his classroom before school starts. Charles wears socks that read, “I (heart) haters.” Charles weighs 135 pounds, and he’s been attending the weight-training sessions Kitna runs after school.

Charles didn’t play football and had never lifted weights until Kitna arrived at Lincoln. Now, he takes his shirt off during the workouts, and if there’s an ounce of fat among those 135 pounds, it’s not evident. The kid is shredded.

Kitna has a rapport in the classroom. A natural ability to communicate with these kids, which is good, because the rest of this job is hard.

Start with the fact that Kitna is used to learning a playbook, not putting one together for the day’s lesson. Throw in the overhead projectors and the graphing calculators — which Kitna didn’t use in high school — and, well, there are times when staring down a blitz would feel more comfortable than standing in the pocket of his classroom.

His classroom is open before the school day starts, and the teacher who was looking for open receivers last year is now looking for opportunities to assist. He thanks a student named Anthony who comes in for extra help.

It’s not hard to imagine a former NFL quarterback filling his afternoons with football. It’s tougher to imagine that same man — a guy who was making $3 million last year — arriving on campus at 7 a.m. and bringing breakfast for kids who need extra help, hosting a home room and then teaching two periods of algebra.

This was the path Kitna and his family wanted. One he planned for, and while he ended up in the classroom much later than he expected, he’s here now. Back at the school he attended before heading off to Central Washington, where he started out as the last of 12 quarterbacks and played his way not just to the starting job, but to a pro career.

His career is proof of the potential that is contained within these halls, something he points out. There are about 2,000 players in the NFL at any given time, and every year as many as 400 rookies come looking to take someone’s place at the table. Two years ago, Kitna went and looked up how many players from his rookie class remained in the league.

He counted six, and two of them attended Lincoln: Kitna and safety Lawyer Milloy, his high-school teammate and the best athlete to ever come out of Lincoln. That reality provides the backbone of the rallying cry.

“His message is, ‘There’s greatness in these halls,’ ” said Erwin. “That’s the exciting thing about having Jon here. Do I want to win football games? Sure. But I want him to be able to convey to kids his story and the greatness that is here in this school so that kids start to live up to their potential as opposed to live down to some of the expectations others might have.”

Kitna’s expectations are high. He has visions of an alumni association whose donating members number in the thousands, and Jennifer has turned the school’s booster club into a registered charity.

The school has a new weight room, the football program a new energy and in Room 102 there’s a first-year math teacher standing at the front of his classroom watching his students complete their assignment.

Yes, they most certainly are.