We switched our cell service to Ting.com this weekend 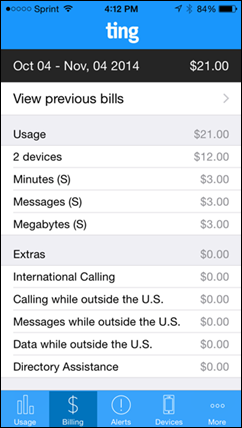 After a few months of talking, we finally switch two of our phones to Ting. Hopefully the service won’t change and that with only two of us on the account we’ll be able to save a few dollars. As I mentioned before, my daughter made the switch a couple months ago after her move to Minneapolis and has had no complaints. The switch couldn’t have been easier … so as long as you have the correct phones (non-latest model Sprint) and are not still under contract.

Our two Sprint devices, iPhone 5 and 5s, the newest just available to switch as of September 29, 2014 are both out of contract and should NOT have an ETF (Early Termination Fee). I looked at adding one of my LTE MiFi devices, but Ting is “high” when it comes to data pricing … so those with heavy wireless date (non- wifi) might want to look elsewhere. For now, I’ll continue to use Freedompop for my wireless MiFi puck and use “off-wifi” data when connecting my notebook and iPad sparingly.

It’s seems ridiculous, but I continue to keep my old international flipphone active for out of country travel and use my Samsung Galaxy SII on Freedompop as a backup.

Tip: One of the setting for iPhone group messaging users when moving to Ting is to access the Ting app settings for “data” and flip the switch indicated below to the “on” position.