Do you know what your student loan repayments are used for? 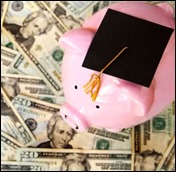 A discussion between the host and guest on CNBC this week concluded that instead of saving college students money on their student loans that the government was using the repayments in other areas amounting to BILLIONS of dollars – ie. $19 billion for deficit reduction and Obamacare!

It seems the take-over by the Federal Direct Loan Program, in lieu of of evil capitalist at profit centered banks, now has students paying higher rates than necessary instead of preventing deeper debt. It shouldn’t surprise me knowing how our federal government works when it comes to getting their hands on big chunks of money, but what did surprise me was where repayment dollars were slated to go. I must have missed this back in 2009-2010 when the Democrats controlled congress and made this change?

When the health-care law was passed in 2010, Democrats slipped in massive changes to student-loan programs, essentially cutting banks out of the business. In the official score of the health-care bill by the Congressional Budget Office, ending federal guarantees for federal loans and replacing them with direct loans made by the Education Department would yield $58 billion between 2010 and 2019.

All federal money is fungible, but with such a large pot of money suddenly (theoretically) available, Congress wanted to spend it on other things. Here’s the breakdown of where the money went:

$36 billion on increases in Pell college grants for low-income students.