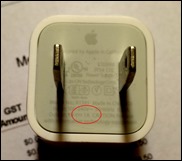 This is probably something I should have known, but the small Apple device chargers have such small printing that I’ve never eyeballed them close enough. The are only a 1A charging device so they do not power the Raspberry Pi computers approrpriately (just in case you needed to know). Instead, you’ll need to be looking for a 2A – 5 volt USB device … like the ones sold for this purpose or many others. Too bad since I was really hoping to used this tiny device with a short USB to micro USB cable for the Raspberry Pi when I mount it in the detached garage. (click photo if you have aging eyes too)