Our countries founders and past presidents, no matter their political party, would be “turning over in their graves” 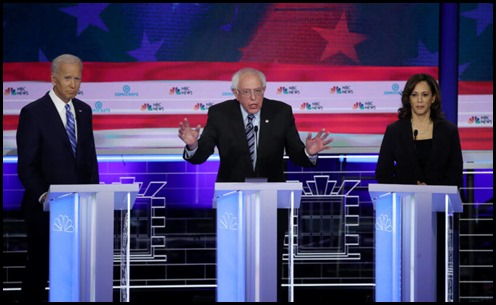 After watching the two night Democratic Debate last week, I couldn’t help, but notice that the socialist wing of the party has moved every candidate WAY left. All of the current 20+ candidates running to be the DEM’s nominee have made previous Democratic presidents look moderate, including President Obama … or made some even look conservative – President Kennedy from my memory.

It will be quite the nomination process in watching each of these Democrats trying to "out progressive" each other … and then have to shift "somehow" in the general election in a way that doesn’t look phony. How will the patriotic blue-collar traditional Democrats be able vote for any of these candidates … or for that matter, how can a Never-Trump voter stand by and watch their country turn into a socialist state?

We live in interesting times.

(Side note: etomology on the phrase “turn over in their graves“)

The earliest known example is a 4 November 1801 House of Commons speech by a Mr. Windham warning Britain against giving too much power to France during the preliminaries to peace following the revolutionary wars: “Thus have we done a thing altogether unknown in the history of this country ; a thing which would have scared all former politicians ; a thing, which, if our old Whig politicians were now to hear, they would turn in their graves.” One of the earliest uses is found in William Thackeray’s 1849 work The History of Pendennis, where Mrs. Wapshot, upset by a man’s advances on the widow of Mr. Pendennis whom the widow had “never liked,” says it’s “enough to make poor Mr. Pendennis turn in his grave.” Another early use of the phrase is in historian James Bryce’s 1888 work The American Commonwealth in which he said: “Jefferson might turn in his grave if he knew.” It has also been said that circa 1906, when George Bernard Shaw was invited to Henry Irving’s funeral, he said “If I were at Westminster, Henry Irving would turn in his grave, just as Shakespeare would turn in his grave were Henry Irving at Stratford,” implying that Irving’s productions of Shakespeare would have made the actor as offensive to Shakespeare as Shaw had made himself offensive to Irving with the numerous critical reviews he had written of Irving’s work. In 1902, the work Current Literature stated that “William Morris might well turn in his grave if he could see the uses to which his fine dreams of beautiful books have been put.” Where the sorry state of people’s spelling/punctuation/literary skills come under criticism, the act is generally said to make “Shakespeare turn in his grave,” as he is associated with high literary standards. One example of this is when a national newspaper opined that writing the word “cough” with an “F” would cause such a thing to occur.