Will General Electric $GE gain favor from investors in 2020?

As far as one of my biggest investing mistakes goes — buying General Electric ($GE) “after their initial collapse in 2017” – I am hoping this next year “might” be a year of true recovery (pre-posting over lunch on Thursday January 2, 2020)?

Of course that is yet to be, but 2019 was at least promising since the stock may have at least found a bottom. The culture has supposedly changed and management under 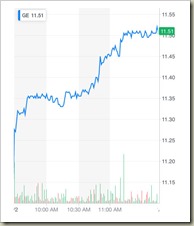 CEO Larry Culp has made progress on controlling cost and shedding poorly performing units. Debt is still a problem and their once great GE aircraft engine segment is likely feeling the pinch from Boeing’s ($BA) 737 MAX problems.

All in all, the analysts who initially calculated the value of GE’s pieces at $9-$11 per share seem to have been correct (at least until the next recession hits – yikes!). As someone who started to pick up shares under $17 and buying the final few shares at $9.25 … I’m happy 2020is  finally seeing shares trading over $11.50.

General Electric (ticker: GE) isn’t in the Dow Jones Industrial Average any longer. It was removed in 2018. Walgreens (WBA) was given its place. Still, given the year that GE had, Barron’s thinks the iconic American manufacturer deserves its own review. It was a good year for GE shareholders. But to keep it going in 2020, CEO Larry Culp must continue to make progress on costs and culture.

GE shares started off the year at $7.57, down more than 80% from all-time highs. In August, forensic accountant Harry Markopolos — the man credited with uncovering the Bernie Madoff Ponzi scheme — said the company was willfully cooking its long-term-care insurance accounting books. GE denied the allegations and the stock recovered all losses in about a month.

Progress on a corporate turnaround being led by CEO Larry Culp is the reason for gains. But the stock was also unusually depressed to start the year because of tax-loss selling. After two years of big declines, many investors decided the end of 2018 was time to get out. Selling losing positions at the end of the year generates tax losses that can offset short- and long-term capital gains.

This year was different as Culp calmed the company’s turbulence. GE beat Wall Street earnings expectations in all three quarters reported in 2019. And investors have a clear vision of what to expect: debt and cost reduction. It looks as if GE will hit the financial-leverage targets Culp set out when taking the job. GE is targeting less than 2.5 times net debt to Ebitda, short for earnings before interest, taxes, deprecation and amortization — a common measure of debt leverage — in its industrial business, and 4.5 times debt to total capital in its lending arm. GE is meeting its debt pay-down goals mainly through asset sales.

GE remains complicated. GE Capital is, effectively, a large bank attached to an industrial conglomerate. It is bigger, relatively speaking, than lending arms at Deere (DE) or Caterpillar (CAT).

There is a softer side to Culp’s leadership too. A lean-management devotee, he is trying to instill lean techniques across the organization. Culture can be difficult to quantify but, ultimately, investors will expect the efforts to yield higher, more-consistent profit margins.

Bearish J.P. Morgan analyst Stephen Tusa recommends selling shares short. In fact, it is one of his top ideas and a bold call. It is one thing to avoid a stock, quite another to actively bet on shares falling.

"We see the debate around balance sheet and 2021 normalized earnings [and] free cash flow playing out fully in the next six months," Tusa wrote in a December research report. He thinks the turnaround under way can’t produce sustainable results. What’s more, when investors start thinking about 2021 numbers — which usually happens around midyear — he thinks shares will fall.

About the same time Tusa called the stock a short , UBS analyst Markus Mittermaier upgraded GE shares to Buy. Mittermaier says 2020 is an "inflection year," believing free cash flow will continue to improve. "We think investors today can get exposure to a much narrower conglomerate — versus about 12 months ago — with leading industrial franchises — aviation and health care — at a discounted relative valuation." His price target for the stock is $14 a share.

It isn’t possible to declare who will be right. There are pitfalls for GE shares. For one, the Boeing (BA) 737 MAX grounding will need to end. Boeing’s problems are temporarily costing GE an engine supplier, about $400 million in free cash flow each quarter. Also, a recession would be bad news for any stock. For the stock to keep working, management will have to continue to give and meet conservative guidance. And earnings will have to improve. That isn’t too different from any other industrial stock out there.