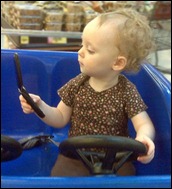 I’m sure I’m not the only one noticing the growing number of drivers texting and driving distracted (and ‘yes’ I have unfortunately done my share). Of course it is not just messaging, but also looking at dashboard information displays and GPS devices … and even watching movies on video screens … but soon doing it in Ohio is going to be expensive come September 2012 (in some cities it already does, so beware) — but then again a ticket and fine is better than an accident.

It is also going to be challenging for law enforcement since the new law seems to be a little short on clarity? Under 18, over 18, GPS ok, but no manipulation. Ok to put phone numbers in a cellphone, but then only talking on handsfree devices … unless you’re under 18. Hmm, is my mounted iPad running GPS mapping ok … or is my windshield mounted cellphone going to get me a ticket just because a text message pops up while I’m driving?

Here are a few of the changes in Ohio to take note of … particularly come September 1st … if you use an electronic device in your car:

Q: When will the law take effect?

A: The law takes effect 90 days after Kasich signed it, which is Aug. 30. State troopers and officers can’t issue tickets or citations for the first six months after the effective date. However, they can give drivers a warning and provide information about the ban and using electronics.

Q: How will the ban work?

A: The law will make texting with handheld devices a secondary offense for adults. That means drivers can be ticketed for typing emails or instant messages only if they were first pulled over for another offense, such as running a red light or not stopping at a stop sign.

Q: How is it tougher on teen drivers?

A: The measure bans drivers under age 18 from using cellphones, iPads, laptops or other electronic devices. They can’t make calls or browse the Web while driving. Texting or using an electronic device is a primary offense for minors, so they can more easily get ticketed if an officer catches them violating the ban.

Q: Are there any exemptions?

A: Yes, several. The measure does allow all drivers to text and use their cellphones in cases of an emergency and when the vehicle is stopped and off the road. Adult drivers cannot be cited for typing in a number or a name to make a call, among other exemptions.

Q: Can drivers still use hands-free devices, such as those that allow voice-operated texts?

A: Yes, but only adults.

A: Yes. And teens can use them, too, but they can’t manipulate them while driving.

Q: What are the penalties for breaking the law?

A: Ohio’s law makes texting a misdemeanor for drivers, with possible fines of $150. Minors can be fined $150 for the first offense and have their license suspended for 60 days. Repeat teen offenders can be fined $300 and have their license taken away for a year. The measure won’t trump city ordinances on texting or cellphone use that might be tougher.

Q: What does law enforcement think about the ban?

A: The Ohio Fraternal Order of Police supports the legislation. However, the group’s president has said the organization would have preferred that texting be a primary offense for all drivers — not just teens — because it would have been easier to enforce. Still, Ohio FOP president Jay McDonald says the law will give officers an avenue to investigate whether texting has played a role in a crash or traffic accident.