Capitalism is good, so why is it getting such a bad rap?

When did Americans become so critical of free enterprise and capitalism? Either they have been blinded by those who have socialist philosophical views or they have seen “free market capitalism” turn to “crony capitalism” in recent years.

… capitalism is the best thing that has ever happened to the material condition of the human race. From the dawn of history until the 18th century, every society in the world was impoverished, with only the thinnest film of wealth on top. Then came capitalism and the 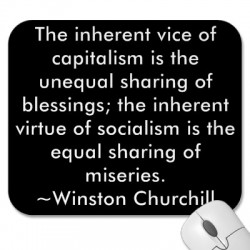 Remember the above when you walk into the voting booth this November and let’s fix the problem with our capitalist system (the crony capitalism part) … and not pick a path that history has proven repeatedly fails and immiserates the masses.

What we hear nowadays is a war of words from the media — the political left and the  right have opposing views on how to best revive our economy and create jobs –– liberals want bigger government, more regulation and growth in entitlements requiring more taxes; the conservatives want  smaller government,  fewer regulations, more individual responsibility … as well as across the board lower taxes trusting the earner to spend wiser than our goverment.  One would think that a look to history gives a clear cut answer, since it wasn’t until individuals were given the freedom “from” oppressive governments and their heavy taxes that the American experiment was tried. With this new found democracy,  innovation advanced and gave a chance for individuals to capitalize on their own work. That said,  I recognize that capitalism works best when our government representatives are not tied to (or in the pockets of)  corporations, powerful individuals or groups such as unions. Thankfully, we as individuals still have the ultimate control … one person, one vote.  The less dependent we can be on government and the smaller the government’s influence on business, the better it will be  for the country and ALL our citizens. A functioning free market capitalist system is the best way to improve the quality of life of all citizens, so let’s reignite the spirit that founded this country and embrace capitalism once again.