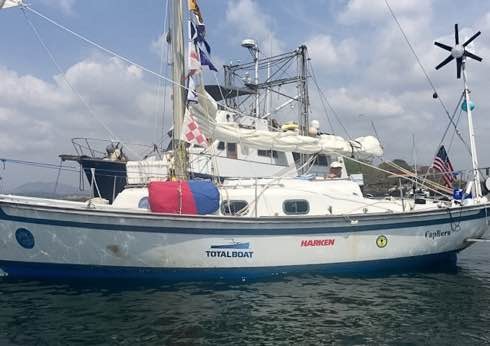 Donna Lange anchored aboard her boat Inspired Insanity (renamed Inspired Sanity, this trip she says) on March 29, 2016 near the Panama Canal

Solo ’round-the-world sailor Donna Lange is safely at anchor west of the Panama Canal after lousy weather stymied her non-stop circumnavigation via the Cape Horn. She detoured after suffering damage and lose of her electronics and will head for a Rhode Island completion after passing through the canal. Her initial plan was to be the first woman to sail nonstop by rounding both capes (Africa and South America) — still, she is on an impressive 2nd rounding. It is a physical undertaking on such a small 28′ boat for a 53 year old. “Keep on, keeping on” Donna!

Donna Lange set out last May from Bristol, RI on a round-the-world voyage and will be making landfall this week in Panama.