What was the best present you ever received as a child? 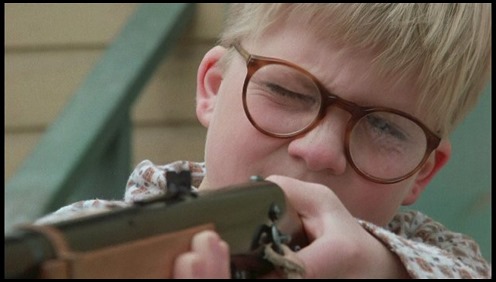 Sometimes there are things that seemed to be written just for me … like the response to a serious of questions posed to Mike Rowe. I can relate 100% to the want of a Crosman BB gun at the 9 year old mark (and dad was understanding, but mom was worried — a "worrywart" was she!).

The difference, ever so minor, was that my yearning was for a Crosman 760 Pumpmaster with bolt action … but it was Mike very creative Freudian misspelling which tickled my funnybone.

6. What’s the best present you ever received as a child?

When I was nine, I got a Crosman Arms M1 Air Rifle. It was just like the scene in “A Christmas Story,” except it was my birthday. My mother was worried I’d shoot my eye out, but my father overruled her. I’ve never felt so much excitement or anticipation as I did pulling that Crosman M1 Air Rifle from it’s long, cylindrical box and felt it’s comforting weight in my sweaty nine-year old palms. An hour later, I shot the tire swing in the back yard. The BB bounced back and hit me in the forehead, really hard. Scared the hell out me. I told my mother the red welt above my eye was a pimple.

7. What’s the best present you ever gave?

The day after I turned nine, I gave my little bother a Crosman Arms M1 Air Rifle. And wished him well.

https://t.co/T3pbO4T80E
Lisa who writes for @TownHall called and asked if I’d be willing to answer a few questions. pic.twitter.com/xknJ3adeQ0