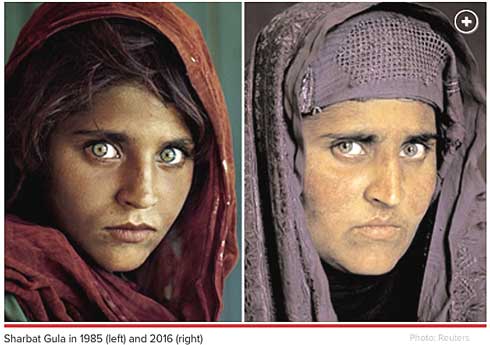 Pakistani police have arrested National Geographic’s green-eyed “Afghan Girl” — whose striking picture became the symbol of the plight of refugees– for having a phony ID card.Pakistan’s Federal Investigation Agency conducted a raid Wednesday at a residence in the city of Peshawar, where Sharbat Gula was taken into custody. 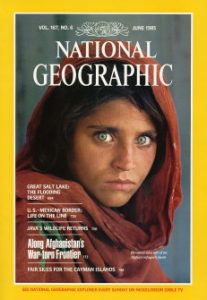 The FIA had gotten word about her bogus ID card two years ago, and launched an investigation into her and her husband under a Pakistan government crack down on undocumented foreigners, according to AFP. But it took time for investigators to track down Gula because she went into hiding to elude capture. Her husband is still being sought, the AFP said.If convicted, Gula faces seven to 14 years in prison and a fine of $3,000-$5,000, but it’s unlikely she’ll serve such a harsh sentence.

Three Pakistani officials were terminated from their jobs as a result of providing the card to Gula, who apparently was trying to avoid returning to her war torn country of Afghanistan, AFP said. They, too, are wanted by Pakistani authorities.

Gula, who is now in her 40s, had applied for a Pakistani identity card in Peshawar in April 2014, using a pseudonym Sharbat Bibi, AFP reported. Steve McCurry’s snapped the legendary photo of Gula in 1984, when she was in a refugee camp in northwest Pakistan during the Soviet Union’s occupation of Afghanistan. The picture appeared on the June 1985 cover of the magazine.Pakistan has been a safe haven for millions of people from Afghanistan since 1979, when the Soviets invaded the country. There are 1.4 million registered Afghan refugees in the country, and about 1 million more unregistered, according to AFP. Officials in Islamabad estimate about 60,675 bogus IDs still in circulation.