A good economy, but we are dealing with other political issues

Yes … the U..S economy is in good shape … but if you are an investor, these last few weeks may not have felt like the stock market is responding as it should in a good economy? Enter trade with China … well primarily China. Yet there is also unrest in the Middle East with Iran’s saber rattling, Hezbollah firing rockets into Israel, Venezuela shaking their military dictator in South America, Britain with their Brexit dilemma and most of Europe in dealing with their sluggish economy and changing demographics (might as well add Russia into the mix too).

So with all of that, improving our trade agreements with China and others who have been unwilling to play fair for decades, doesn’t seem unrealistic 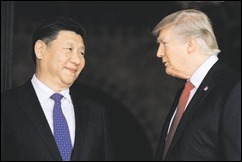 of a request. Even our internal disagreements between Democrats and Republicans … or even deeper disagreements between the socialist left and conservative right … aren’t really unsolvable or unusual for an open country permitting robust debate and disagreement. Better to deal with all these issues when the economy is strong than when it is weak. So … all in all, let’s not get too down in the mouth in dealing with our issues.  Let’s follow through with at least correcting years of intellectual property theft, unfair tariffs on US products and manipulation of currencies in order to favor China and move into the primaries and 2020 election with choices. I’d personally rather have clear cut candidates with issues to vote for rather the only differences being personality.

Investors ended last week hopeful for a quick resolution to the trade dispute between the U.S. and China. Those hopes were dashed after China said it would raise tariffs on U.S. goods and President Donald Trump signed an executive order banning telecommunications equipment built by “foreign adversaries.” Further talks between the U.S. and China seem to be off the table for now.