The Love Bugs are back and bugging Florida residents (and me) 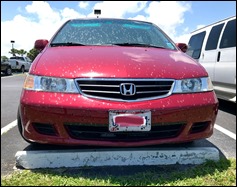 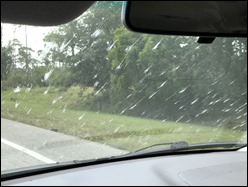 Although the Love Bugs didn’t seem quite a bad driving through Florida this past week as they were a few years ago (added old photo for ThrowBack Thursday #TBT), they still managed to annoy me aboard Encore and messed up the Honda Odyssey. Thankfully there were also several heavy thunderstorms when driving and since I just buffed and waxed, the splattered bugs came off easily.

Dreaded lovebugs are back, swarming cars.
What you should know about the invasive species

MELBOURNE, Fla. — No, they aren’t some genetic experiment gone wrong, just the usual swarm that splatters its way through the Space Coast twice a year.

They don’t belong. But, they aren’t going away.

Lovebugs live just three or four days, packing plenty of annoyance into short lifespans. They madden motorists as they splatter their guts on windshields and hoods.

They gross out joggers and cyclists as they land in their mouths. And they stress out the chronically clean as they speckle otherwise immaculate white walls of beachside resorts and condos almost completely black. Someone’s got to clean them up.

There’s nothing illusory about their gooey impacts. But many myths persist about the lowly lovebug: Do they bite or spread disease? How did they get here? Are the white splotches they leave behind acidic?

Norman Leppla, an entomologist at University of Florida, has spent years debunking the multitude of lovebug myths, in his presentations for UF’s Institute of Food and Agricultural Sciences (IFAS).

For starters, he says, lovebugs weren’t genetically modified and then released by UF scientists as a way to rid the state of mosquitoes, Leppla assures. They don’t even eat mosquitoes.

They are an invasive species, however. They emigrated into Texas and Louisiana from Central America in the 1920s, Leppla says. They didn’t show up in Florida until the 1940s, and Brevard until the 1970s, when they were much worse than now. Their spread in Florida might have been helped along by prevailing winds, vehicle traffic, sod transport, expansion of pastures, and increased habitat along highways, UF researchers suspect.

"They came to Florida just after World War II, we think pretty much by themselves, across the Yucatan," Leppla says in an IFAS educational video about the bug. "And they radiated across to Florida, and we had a lot more of them then than we do now."

Lovebugs are attracted to irradiated exhaust fumes from cars, lawnmowers and other engines, and to heat.

Males swarm over places where they know females will soon emerge. The females fly into swarms of the hovering males, typically from 8 to 10 a.m. and from 4 to 5 p.m. The timing can plaster lovebug carcasses all over cars as rush-hour traffic passes bug-packed Brazilian pepper trees and other roadside vegetation where the bugs live along interstates and major thoroughfares.

Up to eight males compete for each female. The lovebug "flights" usually only happen during daylight and temperatures above 68 degrees Fahrenheit. At night, they rest on low-growing plants.

"Lovebugs have no risk to human health whatsoever," Leppla assures in the IFAS video. "They don’t transmit diseases … They couldn’t bite you if they wanted to."

The white splatter they leave on the cars is their eggs, Leppla says. "They aren’t acid and they aren’t basic. They’re fairly neutral. So what causes the problem is leaving those on the car, until the sun and the heat, and perhaps microorganisms cause them to be damaging."

Over several days, bacteria increases the acidity and etches the paint. So IFAS recommends soaking the surface with water for about five minutes, then scrubbing within 15 to 20 minutes to remove most of the lovebugs without harm to automobile paint.

There really isn’t any way to control lovebugs, scientists warn. Pesticides don’t help. The bugs fly up into the breeze to avoid it. Few predators eat them.

Biologists say that now that lovebugs are here, they do serve an important ecological role in Florida. Lovebug larvae convert plant material into organic components that growing plants recycle for food, according to a University of Florida report.

Lovebugs add to the litany of Florida creatures that herald what’s to come, biologist say.