What is going to stop the US stock market and $AAPL stock?

While working on post highlighting the DJIA crossing 29,000, I realized that the stock market has blown through that milestone and is rocketing towards 30,000 and that I’ll have to start over (probably a “worry-wart” post is coming).

One of the big contributors to this Dow Jones Industrial Average is Apple ($AAPL). It just continues to trade higher.

The fact that CEO Tim Cook has learned to put his personal politics aside and work with President Trump certainly doesn’t hurt when gaining favor with US trade negotiations with China. Of course the entire economy benefits with lowered tensions and tariffs, but those who play the game best are the ones who work within the system. Apple is doing this pretty well considering.

On the other hand, passing and signing big trade deals like USMCA between the US, Mexico and Canada and getting phase one in place with China 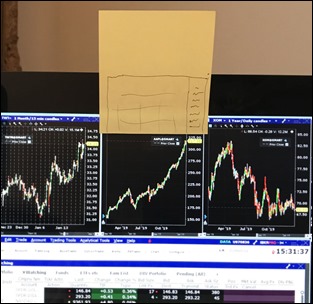 doesn’t hurt either. Personally, I suspect those foreign leaders playing hardball with the US are beginning to think the election in November favors  President Trump … where as they may have been waiting out his term believing a Democrat would be easier to manipulate into a more favorable deal?
(speculation on my part)

All in all, the economy is still holding up well (housing starts up today) and companies who already have a great product AND know how to play ball in today’s divisive political culture, will come out ahead … ahead so much so that I’ve humorously added a Post-It Note to the AAPL chart on my computer monitor (photo left).

Also while thinking about how Apple’s CEO Tim Cook worked with leaders in China and “likely” a leader he doesn’t particulaly see eye to eye with in the US (President Trump), this bit of sage advice that I jotted down a while ago came to mind:

A wise senior business leader once said, “It is impossible to prosper when there is war. You must seek peace first; then you will prosper.”

So .. the sooner you make peace with your adversary, you’ll be able to refocus you energy on mutually beneficial outcomes.