Music Monday: Green Day and the a US National Park road trip

More than a few of us have contemplated just what it would take to see as many U.S. National Parks in our lifetime (and Canadian National Parks for me). Likely, very few of us will accomplish the lofty ambition, but then as I recently mentioned to my daughter who enjoys tying visits and hikes in our National Parks on her family vacations –  it is “the journey

I’ve seen a similar (or the same?) article before with the map showing the Ultimate U.S. National Park Road Trip before, but when reading it again a couple weeks ago, I was listening to music and contemplating the lyrics to the song “I hope you have the time of your life.” Hm, I then thought, it might be worth archiving the map along with the 1997 Green Day song Good Riddance (Time of Your Life) for Music Monday. 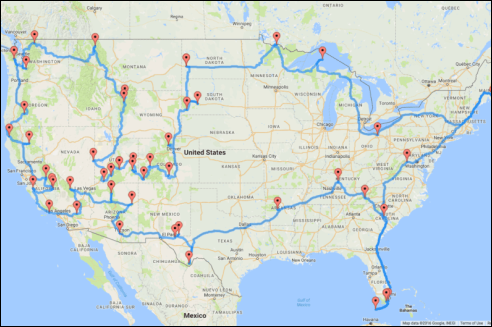 If exploring the breathtaking beauty of our National Park System in one road trip is something on your bucket list, this may be the perfect map for you.

In celebration of the 100th anniversary of the National Park Service, blogger Randy Olson devised an optimal route to see the most epic national parks across the nation.

The U.S. National Park System technically consists of 59 parks, but 12 of them are in Alaska, Hawaii and other U.S. territories. This road trip is focused solely on those you can reach by car in one trip within the Continental 48.

Even with the reduction of the parks outside the Lower 48, Olson included 47 others along his route that stop in 23 different states. If you’ve never been to the Grand Canyon, Great Smoky Mountains, Joshua Tree or any of the other great National Parks, this may be the best way to see them in one shot.

Those determined to finish the trip can do so in approximately two months. The route covers 14,498 miles. Olson starts his trip at the Grand Canyon, but he designed the route as a loop, so you could begin anywhere on the map and travel in whichever direction you’d like.
The Stops