A few years ago Facebook rocketed to popularity as a social network for the .EDU college crowd … or .edu to be net savvy (lc). This emerging adult crowd was the envy of every high school teen and "wanna be older" pre-high student and having a Facebook account was a coming of age milestone. Parents debated if their kids were ready for the online social world and in many case decided their children needed to be chaperoned …

so they joined too “just to keep and eye on things” and began interacting. College kids are now adults and the modern Facebook evolved into a place family and friends share their lives together. I the early FB days, I recall talking to my son and asked him … "why don’t you just email?" His reply, "Dad, emails old school, we do everything on Facebook these days." (ah, AOL I thought?)

While out to dinner with similar aged friends this weekend we discussed the fact that Brenda doesn’t have a Facebook account and doesn’t want one. She doesn’t see much benefit questions the long term consequences of permitting companies to archive so much social networking communication. No doubt a point everyone online (or with drones, street cameras, etc … ALL of us) has to contend with.

We sort of concluded that teens were leaving Facebook because the adults were there … but after thinking a little more about it, perhaps thirteen year old Ruby Karp is lends a little more clarity – FB is invasive, has become a “marketing mouthpiece” and there are a lot of simpler mobile option without all the changing – “we liked it the way it was.” 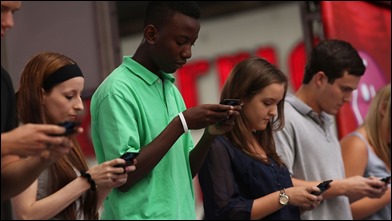 I’m a teen living in New York. All of my friends have social networks — Instagram, Vine,Snapchat, etc. Facebook used to be all I could talk about when I was younger. “Mom, I want a Facebook!” and other whining only a mother could put up with.

But now, at 13, I’ve been noticing something different. Facebook is losing teens lately, and I think I know why.

Part of the reason Facebook is losing my generation’s attention is the fact that there are other networks now. When I was 10, I wasn’t old enough to have a Facebook. But a magical thing called Instagram had just come out … and our parents had no idea there was an age limit. Rapidly, all my friends got Instagrams.

Now, when we are old enough to get Facebook, we don’t want it.

More at this Mashable LINK