The Apollo 14 mission and a long distance technical support call

What a great story told by YouTuber Scott Manley about the early days of NASA, their Apollo 14 computing problem and a "tech support call" to a programmer (video below). The story is longish and likely only of interest for those on the geeky side who work with computer or are programmers — it would help if you have an interest in the history of space exploration too. 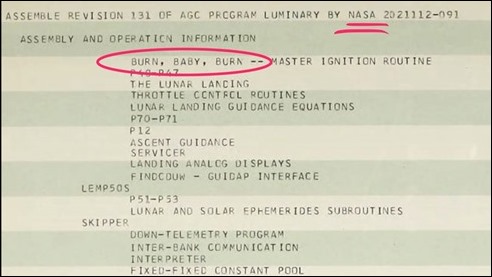 The video below has several great snips from the early 1970s and those who made the Apollo program successful; it was amazing how astronauts put their lives in the hands of so many brilliant thinkers and pencil-pushers working behind the scenes on earth … some even had a sense of humor when writing code (above)!

Apollo 14 almost never made it to the lunar surface thanks to a hardware failure which caused a short circuit in the abort switch. With the computer seeing the abort switch enabled the software team back on earth had a limited amount of time to figure out how to make the computer ignore the erroneous signal while still performing the landing. This required tweaking program state in memory while the program was running, a delicate operation with dire consequences for failure. No pressure guys.