A Fluidampr Harmonic Balancer for the BMW X5 35d

One of the engine components known to fail prematurely on BMW diesels is the weighty harmonic balancers on the 6 cylinder crank shafts. Perhaps the park is designed with 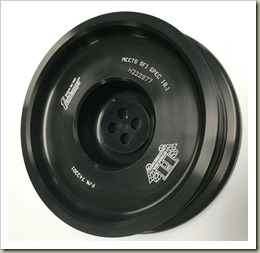 the vibration rubber material that degrades or perhaps it is just the constant hammering of the diesel engine that is hard on the original design? In any case, by the time the engine closes in on 200K .. you’re likely running on borrowed time. Personally I suspect that those who run these engines a little harder or chip-tune them to gain horsepower and torque need to give even more attention to this component.

I’m not particularly hard on my BMW X5 35d, but do have over 180,000 miles and want to replace before I’m dead in the water. Also, I wanted to replace the original designed dampener with a Fluidampr design … so since my friend Andrew Rodriguez was running a Black Friday sale at TuneMyEuro.com, I ordered a new Fluidampr Harmonic Balancer from him. Now to find the time to replace it (a fair amount of weekend work).

Comment: I’m sure I’m not alone in wondering the future of internal combustion engines in cars (and in particular diesel engines) as electrically driven cars start to take a bigger chunk of new car sales. It is still small, but after

watching the Tesla Cybertruck presentation, even I can see the writing on the wall. Eventually the next generation will decide on an EV or some other “yet to be seen” technology. Thankfully I’ll still be driving ICE vehicles and doing my best to keep them going. Likely first to go will be diesel vehicles, but I suspect that even diesels will continue to be around for a long time – BMW Says Diesels Will Still Be Around For At Least 20 Years.

How long does a harmonic balancer last?

Since this part can wear over time, it is important that you recognize the symptoms so you can have your crankshaft harmonic balancer replaced before problems escalate.

Signs that your crankshaft harmonic balancer needs to be replaced include:

It is important to have your balancer replaced as soon as you notice a problem, otherwise other parts of your car can become damaged and your vehicle will be inoperable