A 1989 family glacier photo and thoughts on climate change #TBT

It has been a shockingly mild winter, at least in Cincinnati this year. Generally I don’t put the snow blower on the John Deere 330 tractor until it is needed, yet this year I prepared early … and may have frightened the snow away? Having a winter without much snow is not totally unheard of, but it did have me contemplating climate change and remembering taking a trip with our family, all hunkered down under a glacier in Canada (1989). I’m so glad we had this time together, especially since my brother-in-law Mark passed away at age 40 only a few short years after this trip. 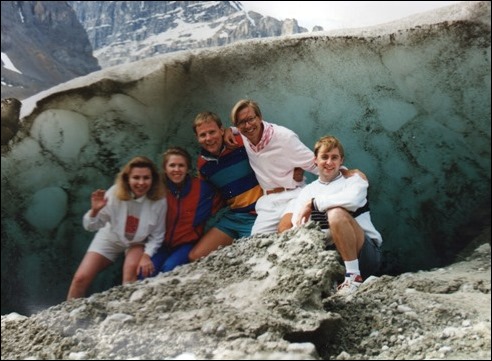 Now, not to be overly political, but I find the debate between those who hyperventilate about “global warming” or the current politically correct term, “climate change” … and those who totally deny there is any change … to be very frustrating. 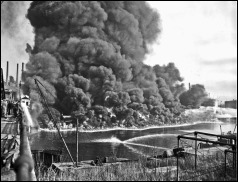 Some of us prefer to be a bit more realistic in regard to what scientists are seeing as a relatively short term trend (in earth age) towards our climate and exactly what we can or should do about it.

First, I’m realistic, as I’ve been hearing “the sky is falling” way too many times only to watch humans adapt and innovate. Growing up I worried about nuclear annihilation and was the concerned over how much we polluted our environment, yet within 20 years, we made reasonable and modest changes … that didn’t negatively impact our economy or way of life – in fact, for most people worldwide, living conditions and lifespan was far better than in previous generations.

We protected our waterways, birds and animals, acid soils and the air quality steadily improved. People forget just how much littering and polluting of our lands and waters was happening (photo of the Cuyahoga River on fire in Cleveland Ohio 1969). In the late 1970s the panic was ozone depletion and then we worried about a second ice age and global cooling.  In the 1980 and 90s it was “peak oil” and turning to renewables; now there is a glut of oil and so much clean natural gas that coal is too expensive to mine. In fact I was (and still am) and advocate for biofuels like biodiesel – believing algae farming in deserts would be a great industry. Hm?

The rally cry from the political “hair-on-fire” crowd is that CO2 emissions are too high and that humans are the ones causing global temperatures to rise, melting the glaciers and the shrinking polar ice caps. Too many people fall prey to the the “We’ve got a deadline: 12 years left” Green New Deal people who wants political control and TRILLIONS of your dollars (be aware: dictatorial control and money) that they can use to save the world control the world.

Now … I’m far from having all the answers, but far be it from me to believe the only answer is to trust those wanting control and money regardless of the economic disruption it causes Americans. If you ask me, triggering poverty, government dependence and eventual hunger would be the quickest way to destroy the environment (look at Venezuela and socialism). The more hardship placed on people, the less important longer term goals of environmental stewardship becomes.

Personally, I suspect “if global temperatures warm and sea levels continue to rise” … humans driving cars, eating meat and using natural gas for heat and to generate electricity” will only play a small role in climate changes. Volcanic activity, deforestation (yes, human) and big picture cosmic changes to our earth just as have happened throughout time in our planet’s history … has a more significant impact. That does not mean we should ignore commonsense measures in how we use and abuse our natural resources … but let’s not panic or force extreme quality of life changes. Perhaps adaptation will be something we’ll all think about? Why do we move south .. perhaps we should be moving north?  Maybe a warming climate is a way to utilize the millions of acres in northern latitudes to farm and produce food? Innovation is increasingly making solar power competitive with fossil fuels and sophisticated batteries will eventually may be able to store enough power to actually power homes and vehicles? Not to mention technology yet to be invented. If you’ve followed advanced battery technology, handheld AI devices and EV vehicles over the past couple of decades, the future is promising … and without excessive panic or dictatorial intervention – so think about it!

Oh .. and if you are not struggling with your position at the moment … read this:

Earth is bracing for a solar minimum: a dormant period in which the Sun radiates less energy or heat at our planet than usual. Scientists have warned that as a result of the Sun’s inactivity, Earth is likely to witness a ‘mini ice age’ that could bring extreme winters and chilly cold storms over the next 30 years.

According to NASA, the Sun will reach its lowest activity in over 200 years in 2020. As it further goes into its natural hibernation phase, Earth will experience extremely cold spells which will trigger food shortages across the planet. The average temperatures could drop as much as one degree Celsius in a period lasting about 12 months. That might not sound a lot but a whole degree fall would have a significant impact on global average temperatures.

Solar minimums are part of the Sun’s natural life cycle and occur once every 11 years. However, 2020’s minimum is going to be a special case. That’s because it marks the start of a rare event known as a Grand Solar Minimum, in which energy emitted from the Sun plummets down even more than usual. These only occur once every 400 years or so.