Without going into the 90-minute State of the Union speech detail, the economic and overall strength of the United States is incredible compared to history or any other country in the world. The numbers and confidence sure look good for President Trump’s reelection campaign. Add to that the overall disfunction of Democrats (Iowa Caucus) with a segment of their party influenced by socialists or at minimum extreme leftists pushing for massive changes to our democratic republic. The challenges, especially for the moderate DEMs who still favor American entrepreneurs and private enterprise, will be how to beat President Trump when the U.S. is firing on all cylinders and placate the loud voices on the far left who favor more government control of industry – aka: socialism. 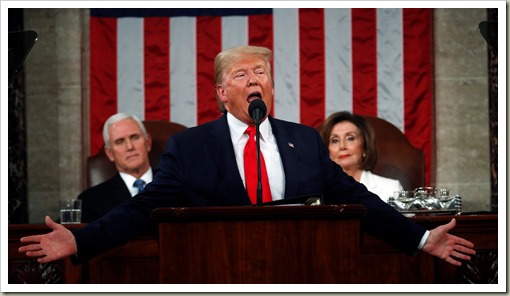 The DEM’s problems aside, President Trump still struggles when it comes to winning over those who still can’t handle his personality quirks. Trump is also just recovering from the impeachment hearings and thankfully ignored the subject. He stayed focus on how his policies have helped reboot American pride at home, and respect around the world. From defeating ISIS, killing terrorists and working to wind down America’s longest war in Afghanistan. POTUS declared, “In just three short years, we have shattered the mentality of American decline and we have rejected the downsizing of America’s destiny,” Trump said. “We are moving forward at a pace that was unimaginable just a short time ago, and we are never going back.”

When President Trump mentioned that 7 million Americans were no longer on “food stamps” while 10 million had joined the food stamp rolls under the previous administration, Republicans jumped to applaud … yet Democrats let out audible groans. It is hard to believe they actually want our citizens to be dependent … although it is increasingly noticeably that they maintain their office when their constituents are dependent on them. Very sad.

The disdain was obvious when it came to the Speaker of the House Nancy Pelosi. Seeing her tear up the State’s State of the Union speech on camera was embarrassing for her … and disrespectful to the office of the President.