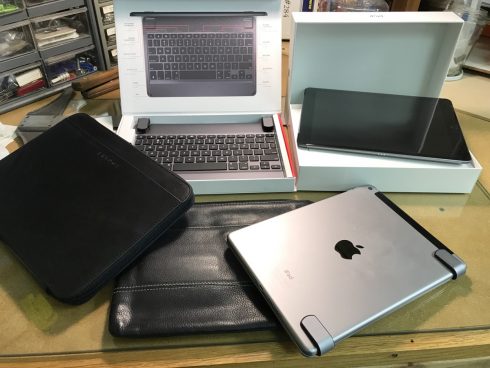 It has been a struggle to make a decision on updating my favorite tech gadget, but after the first generation Brydge Keyboard finally would not charge, I had to do something.

I thought about going all out and moving to the iPad Pro series, but realized that all the functions that I appreciate are already on the basic iPad. I personally prefer the thumbprint-homebutton log-in rather than the camera, can live with the bezel being a little wider; I really don’t have a problem with the performance of the aging processor, which is still rated at 10 hours and gives me a full day of battery use. I did however upgrade the storage to 128GB which was a no-brainer considering I have plenty of files, but will just stick with wi-fi and tether to my iPhone hot-spot rather than pay for an extra wireless plan as I did initially with the iPad Air. 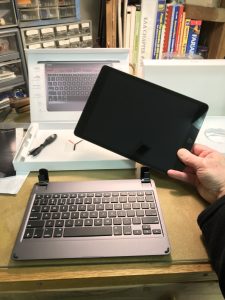 As far as I could find, the Best Buy — $100 off purchase for the 128GB model $329.99 … plus I added 2-year $69 Apple Care — seemed like a fair price for a great Apple product. I’m especially pleased with the ever-so-slightly larger and sharper Retina display and snappier operation (my Air was getting old in the tooth).

The favorite add-on is the Brydge Keyboard which matches the iPad and allows it to function as my travel notebook computer (for the most part). I probably should have looked at the Apple keyboard, but having had a couple other brands before the Brydge … it just wasn’t worth the bother. This bluetooth connected keyboard make it so much easier to type (posting this with the new iPad and Brydge Keyboard) AND the high quality leather case is a must have … but pricey (it should protect both if they are dropped and they offered me a 20% discount due to the fact my old one would no longer charge). After day one … all is functioning as it should and I only hope they give me the same long and dependable service that the last combination did.