The State–Obama Democrats vs Kennedy Democrats 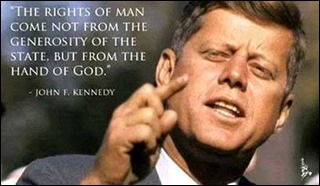 even remember what it was like to support a leader who understood our democracy?John F. Kennedy knew what it was to believe and fight for the words and principles which founded this country. A core difference is in believing that “The rights of man come NOT from the generosity of the state, but from the hand of God.” (January 20, 1961) Where are those Democrats today? Come back!