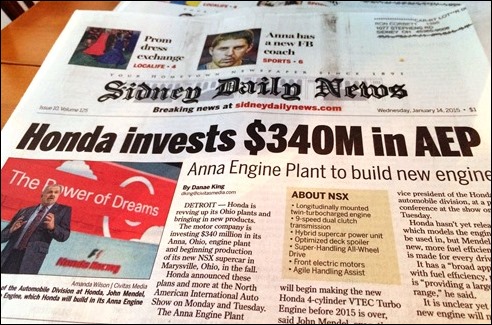 While visiting my dad in Sidney, Ohio this week I could help but catch the headlines in the local paper – Honda invests $340M in AEP (Anna Engine Plant). The area has certainly changed since I was in high school … and Honda’s manufacturing investment and jobs starting in 1985 has been a real boost to this traditionally farm based county. Now with even millions more going into the plant (after $215M in 2014) and a new engine design, I suspect a few more jobs and economic recovery to surge for those supporting the auto jobs. People are going to need places to spend their paychecks … do you need a place to hang your shingle?

According to the article, Honda has not announced the models they will be putting the new VTEC Turbo engine … but since this is slated to be a highly efficient 4-cylinder, I suspect it could be used in several of their vehicles … most likely a high production model.

Honda hasn’t yet released which models the engine will be used in, but Mendel said the new, more fuel efficient engine is made for every driver.

It has a “broad application,” with fuel efficiency, power and is “providing a larger dynamic range,” he said.

It is unclear yet whether the new engine will mean more jobs in Anna or just continued use of the existing workforce, though it will mean the addition of a third assembly line especially for 4-cylinder engines.