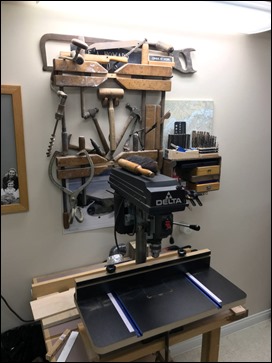 In my workshop there is a spot on the wall behind dad’s small drill press and my router table for old tools. As mentioned before, I use Brenda’s dads’ dental tools regularly and have put a few of DadH’s woodworking tools on the wall – it is too bad I passed on the dental chair. I suspect most of the tools were Brenda’s maternal grandfathers’ as he was a craftsman originally from Sweden who immigrated to the U.S. and ended up in Jamestown, New York building furniture. A coupleof the wood chisels I still use regularly … while others I’ve given to Drew and Taylor (tool stools) – most though have found a spot on my “tool legacy wall” (A few tricks of the trade can only be learned or shared on a blog).

As for my side of the family, my dad had quite a few tools as well. Many of his were of the machine tool and electrical variety and a few have found their way into my inherited toolbox (below). A couple items were mentioned before, like the small drill press and the old Triplett meter – part of my dad’s 44 year career 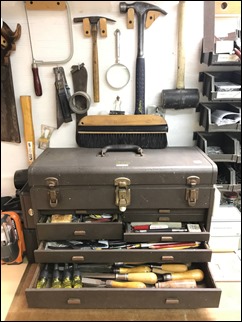 with Haughton Elevator and Schindler Elevator. Although he lived across the street (current Streetview of his childhood house & corn where DadC’s father’s service station was) and worked in Toledo until 1973, he retired from the electrical division in Sidney, Ohio (here’s 2008 newspaper story about the Toledo Haughton Elevator – PDF).

A couple other items recently added next to the “legacy tool wall” was a drill bit shelf by using one of my dad’s old wooden finger joint parts boxes. While doing this, I decided to add my Fostner bits and a few measuring instruments; they are often used to measure my unmarked drill bits. 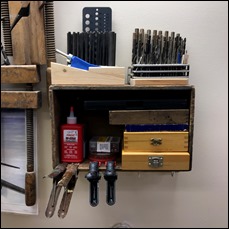 What was interesting to me was to noticing for the first time, my grandfather, Earl Daniel Corbett’s name scribbled on the box. Not only did my dad “likely” inherit this boxed machinist micrometer from his father, but very likely he inherited it from HIS father-in-law, Frank Henry Hirth (see name in photo below). Anyway, I found this desultory information blogworthy. 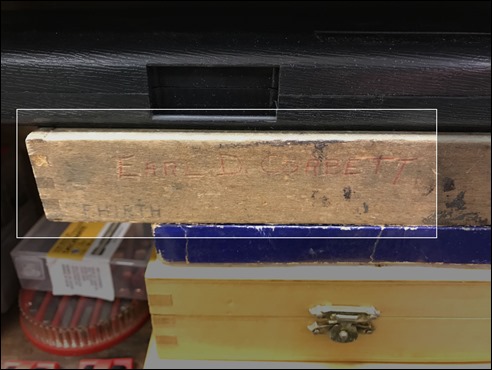